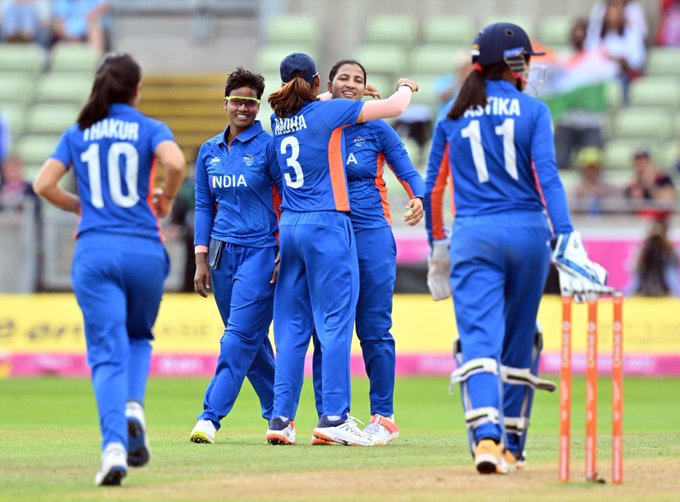 IND vs PAK: The Indian team displayed its “aggressive attitude” under pressure to boost its chances of reaching the semi-finals of the Commonwealth Games by thrashing arch-rivals Pakistan by eight wickets in the second match of the women’s cricket event here on Sunday.

Pakistan’s decision to bat after winning the toss fell heavily on them as the Indian bowlers bundled them out for just 99 runs in the 18-18 overs match due to rain. Spinners Sneh Rana and Radha Yadav took two wickets. Then the Indian team chased this target in just 11.4 overs, in which Smriti Mandhana (63 not out in 42 balls), one of the most attractive batsmen in women’s cricket, with her brilliant strokes She played an unbeaten half-century. The Indian team has been trying to play aggressively for the past few months and the performance of the players on Sunday will surely have been liked by skipper Harmanpreet Kaur.

Mandhana’s innings had three sixes and eight fours. She completed her half-century by hitting off-spinner Tuba Hasan for a six. In the third over, her six in the cover off fast bowler Diana Baig was also visible. This was the second match in this year in which the Indo-Pak match was not close and India won easily. The Indian cricket team had easily defeated their rivals in the 50-over World Cup in New Zealand as well.

However, a large number of sports fans were present at Edgbaston in this Commonwealth Games match. Due to intermittent rain, the match started 45 minutes late, reducing the match to 18-18 overs for each team. Compared to the opening cricket match between India and Australia, the stadium, which has a capacity of 25,000 spectators, attracted more fans but it did not appear that all tickets were sold. The city has a large population of Indian and Pakistani origin. But the number of spectators of Indian origin was visible on the ground, who were sitting with the Indian flag.

The songs of Punjabi star Diljit Dosanjh created an atmosphere and it seemed that the match was not being held in Birmingham but looked like it was taking place in Mohali. Indian bowlers did not allow Pakistan to score big due to their excellent performance in the powerplay. Muniba Ali was the top scorer for Pakistan with 32 runs. Apart from them, Alia Riaz contributed 18 and captain Bismah Maroof contributed 17 runs. Rana took 15 runs in four overs and Radha Yadav took two wickets for 18 runs in three overs.

Renuka Singh bowled her dream spell, she started with a maiden over which is rare in the T20 format. She took one wicket for 20 runs from a maiden in four overs. Rana took the wickets of Muniba and Maroof. Captain Harmanpreet fed an extra all-rounder in the playing XI. She included Rana in place of spinner Rajeshwari Gaikwad. After recovering from COVID-19, late team batsman S Meghna was kept in the playing XI in place of Harleen Deol.