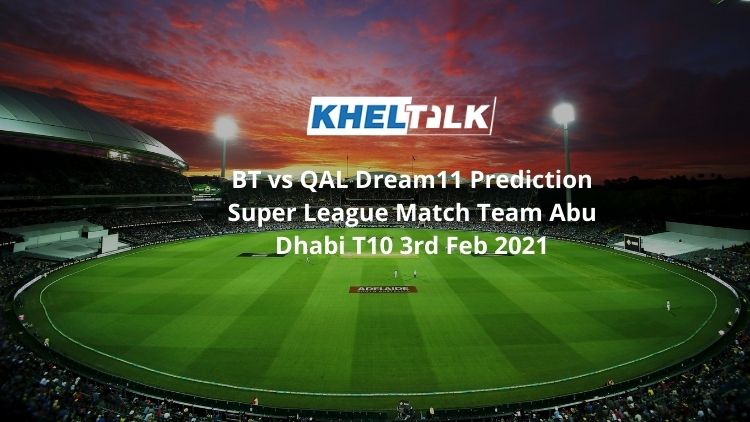 Here are the stats for the teams BT vs QAL

It’s T10 and you can expect the conditions to support the batsmen more. Still, there will be something for the bowlers here. We are in for a good game of cricket here.

The weather will be a good one for the game. Thankfully, the match is in the evening, thus we can expect a cool climate.

We can expect a run-fest here, so make sure to pick more batsmen in your team.

BT has one of the strongest bowling squad here, and we can expect them to do well here. However, they lack a power-hitter, someone like Nicholas Pooran who can be consistent.

We can expect Andre Fletcher to perform here once again and the team will be hoping to get quick runs on board.

One of the best teams here, QAL are the favourites to win the trophy.

Once again, we can expect Tom Banton to do well here and it will be interesting to see how the team goes here.

Tom Banton– He is the best choice for the captaincy here and most importantly he will be opening the batting for the team.

Andre Fletcher: The skipper will be looking to lead his from the front here. He has scored at least 20 runs in all the games so far and we can expect something like that here too.

Shahid Afridi: He is in good form with the ball and is among the wickets as well.

Sohail Akhtar: He is the leading run-scorer for QAL. He has done well and is yet to be dismissed here.

He was the star performer in the team’s first win and will be keen to contribute more here.

He is the leading wicket-taker for his team, and he can contribute with the bat too.

He is likely to open the batting for his team here and we can expect him to add at least 20 to 30 runs.

He is the leading wicket-taker for his team and he can also score useful runs lower down the order.

Here is the Dream 11 Team prediction for BT vs QAL. We are going with players who are currently in good form and can win the match with ease.

Head To Head Team For Bangla Tigers vs Qalandars

Who Will Win Today Between BT vs QAL Dream11 Prediction, Super League?

According to Kheltalk’s astrology BT vs QAL Dream11 match Prediction, Qalandars will win the match.

According to Kheltalk’s BT vs QAL Dream11 toss prediction, QAL will win the toss and will opt to bowl first.