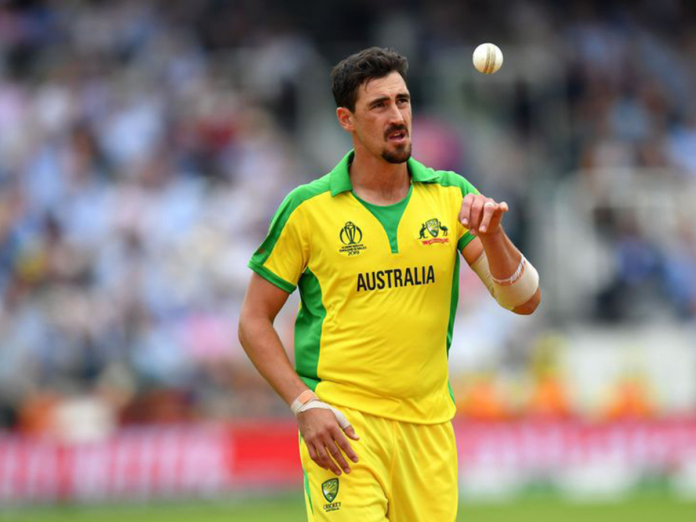 Australian seamer Mitchell Starc is synonymous with firepower and class. He is one of the best pace bowlers ever produced by the island nation. The tearaway pacer is an emblem of class and perseverance.

Starc on Saturday became the fastest bowler to scalp 200 wickets after he picked up a wicket in the 3rd ODI between Australia and Zimbabwe. His prey was Ryan Burl of Zimbabwe and thereby completed 200 wickets in the One Day format.

The left-arm pacer completed the feat in just 102 matches and overtook Pakistan’s legendary off-spinner Saqlain Mushtaq. The Pakistani bowler who is now the head coach of Pakistan had achieved the feat in 104 matches.

There are 2 other Australians in the top 6 list which includes Brett Lee and the late Shane Warne. They had reached the landmark milestone in 112 and 125 matches respectively.

Starc dismissed Ryan bowler at the end of the 37th over and etched his name in the pages of the history books.

It was a historic day for minnows Zimbabwe as they registered their first victory on Australian soil. They won the 3rd and final ODI by 3 wickets in a riveting contest.

Ryan Burl was the player of the match as the right arm leg-break bowler spun a web and bamboozled the Australian batters. He bagged a 5-for and had a staggering economy rate of 3.3.

Zimbabwe blew hot and cold in their run-chase but eventually managed to beat Aaron Finch’s Australian side. It indeed was a historical moment for them. Skipper Regis Chakabva was the top-scorer of Zimbabwe with his unbeaten knock of 37 runs.