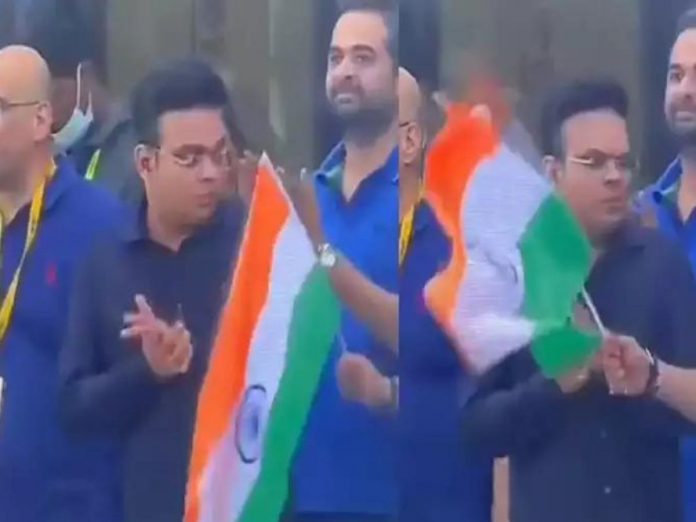 IND vs PAK: India defeated their arch-rivals Pakistan by 5 wickets in the Asia Cup 2022 on Sunday in a nail-biter contest. The enthusiasm of cricket lovers across the country has risen, after the India-Pakistan match, reactions are pouring in on social media. After Team India won, many people vented their emotions on social media.

However, in all this, the Secretary of the Board of Control for Cricket in India (BCCI) Jay Shah is being trolled by netizens. It is understood that this whole incident happened because Jay Shah refused to hold the tricolor flag after the match as can be noticed in the video. Did he do that?

The match between India and Pakistan was in full swing till the last over. India needed 6 runs in 3 balls to win. At that time, Hardik Pandya hit a six and won India. After that, the jubilation of Indian cricket fans started on the ground in Dubai.

There was a jubilant atmosphere in the Indian dressing room and fans. Jai Shah was also present here. While the victory celebrations were going on, a person brought a tricolor flag to Jay Shah. However, Jay Shah sent the man back without holding the tricolor. His video is currently going viral on social media. So many netizens are trolling Jay Shah.

Jay Shah is the second-ranking BJP leader in the country and the son of Union Home Minister Amit Shah. A few days ago, the central government launched a ‘Har Ghar Tiranga’ campaign to awaken nationalism among the people.

Under this campaign, the tricolor was distributed in every house in the country. However, now Amit Shah’s son refused to hold the tricolor. So many netizens are asking if ‘Har Ghar Tiranga’ is only applicable to common people.

Pakistan had set a challenge of 148 runs for victory against India. Chasing this challenge, Virat Kohli and Rohit Sharma were dismissed at strategic moments. But then Ravindra Jadeja and Hardik Pandya batted powerfully to give India victory. Jadeja played a powerful knock of 35 runs this time.

Is it not anti-national ?👇@KTRTRS pic.twitter.com/T7Z51bDd1Q