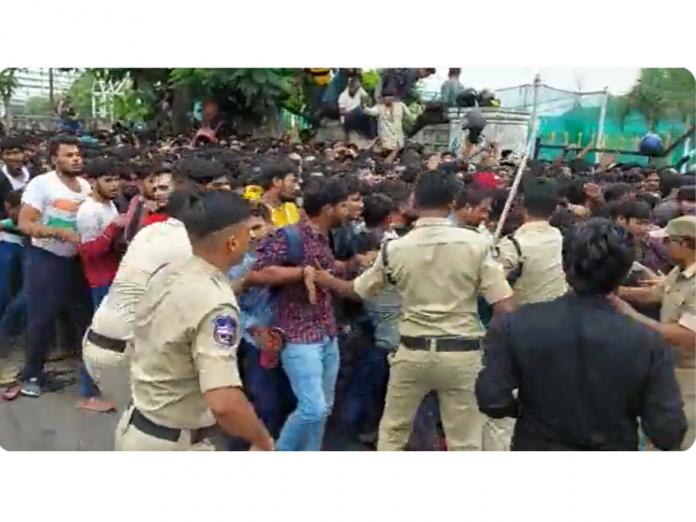 IND vs AUS: India presently is playing a 3-match T20I series against their Australian counterparts. The 1st T20I was won by Australia by 4 wickets and they have taken a crucial lead in the game.

In a shocking and disturbing video that has been doing the rounds on the internet today, the Hyderabad police can be seen doing a lathi charge on the fans who erupted into a protest outside the Raj Gandhi International Stadium in Hyderabad. It is believed that the fans had come to buy the tickets for the 3rd and final T20I between India and Australia.

This is so disappointing. Passionated fans gathered at Gymkhana Ground to collect India Vs Australia tickets in Hyderabad and they’re getting such treatment. pic.twitter.com/OIP96BClOH

In the video, it can be seen that a chaotic situation has arisen and the police can be seen beating the fans with sticks. A few of the fans have been reportedly been injured and this is a serious issue that has plagued the Hyderabad Cricket Association.

The mismanagement from the board officials of Hyderabad Cricket Associated gets highlighted here as the ticket-selling process could have been pulled off in a much more efficient way.

The fans are brimming with passion and energy and the treatment meted out to them is severely disappointing.

India would be keen on making a comeback in the 2nd T20I at Kanpur. Indian bowling sensation Jasprit Bumrah is all set to comeback into the team in this high-voltage game.

India’s death bowling concerns were brought into the limelight as the likes of Bhuvneshwar Kumar and Harshal Patel lost the plot and leaked a lot of runs.