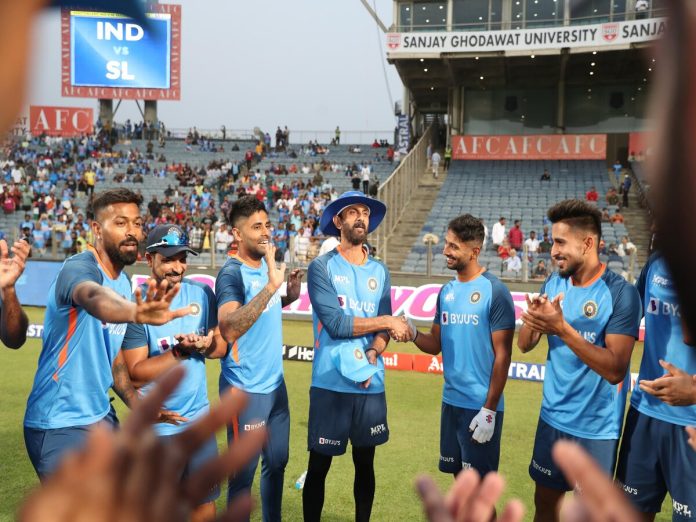 Rahul Tripathi’s highly awaited India squad debut has been made possible by Sanju Samson’s injury. Samson was ruled out of the series, giving Tripathi, who had previously warmed the bench for 13 games, the opportunity to show off his skills. Rahul Tripathi, however, barely hit 5 runs, including a boundary, before being caught by Mendis on a Madushanka delivery. Tripathi’s debut was not that memorable.

During the second T20I of the three-match series between India and Sri Lanka, middle-order batsmen Suryakumar Yadav and Axar Patel maintained the squad in the chase for the 207-run mark.

The collapse of India’s top order put tremendous strain on the middle batting order. Although Suryakumar and Axar kept India in the game for the majority of the encounter, some questions were raised when Rahul Tripathi, making his debut, moved ahead of Suryakumar.

Tripathi was slated to join Hardik Pandya and Axar Patel on the lineup as the finisher in Sanju Samson’s absence. He instead batted in the third place, which was “more natural,” moving Suryakumar to the fourth.

Rahul is accustomed to playing at no. 3

When India’s skipper Hardik was asked about this decision, he said: “Surya had a fantastic run at four. Rahul is accustomed to playing at no. 3, and if someone comes in, we want to give them a role they are comfortable with. That’s why he batted at No. 3.”

Dravid in the press conference said that everyone needed to be patient with the young team and hinted at things to come in the future.

“We are a young team and playing in these pressure situations, in must-win games can only be good for us,” the coach said in the post-match press conference.

“For us, from the last game, we played in the World Cup, only three or four boys played in that team. And we are at a slightly different stage when we are looking at the next cycle of T20 cricket. So, to play a quality side like Sri Lanka is really good for us,” the coach further added.

Despite a damaging 91-run sixth-wicket stand between Suryakumar Yadav (51) and Axar Patel, bowlers spearheaded by Kasun Rajitha limited India to 190-8. (65).

Axar and Shivam Mavi, who scored 26 runs off of 15 balls, were returned in the 20th over thanks to Captain Shanaka’s medium-pace bowling, advancing the series to the last game on Saturday in Rajkot.

But Shanaka’s batting, who shredded the Indian attack with his fifty off 20 balls, the quickest by a Sri Lankan batsman in the T20 format, helped secure the victory.

Also Read: 3 Reasons Why Axar Patel Can Be A Good Replacement For Ravindra Jadeja