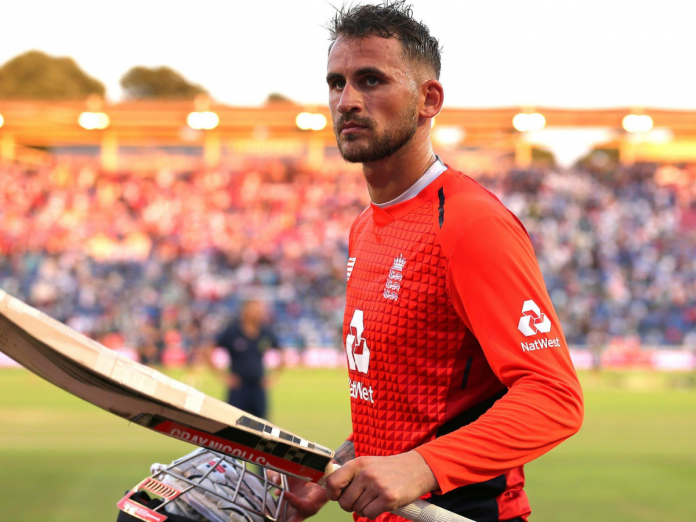 Swashbuckling and buccaneering opener Alex Hales recently staged a comeback into the England T20I side in the series against Pakistan. The star batter last played for England in 2019 and was banned for recreational drug use.

Alex Hales was ignored from the English T20I side despite some stupendous performances with the willow in the leagues across the globe. However, the selectors finally gave him an opportunity in the 7-match T20I away series against Pakistan.

Alex Hales started the series with a bang as he notched up a half-century in the very first T20I. He hit the ground running with his 53-run knock in just 40 deliveries. The absence of Jason Roy and Johnny Bairstow from the squad enabled the fiery batter to make a statement of his own. He grabbed the opportunity with both hands.

Alex Hales was a part of the Kolkata Knight Riders (KKR) franchise after he was roped in by the franchise for the Indian Premier League (IPL) 2022 season. However, he withdrew from the squad just ahead of the season and did not take part in IPL 2022.

In this article, we take a look at 3 teams who might target Alex Hales in the auction of IPL 2023:

A team that desperately needs the services of a batter like Alex Hales is KKR. With Aaron Finch’s dismal form in this format, the English batter might as well replace him in the squad. One of the main reasons why Shreyas Iyer’s KKR finished in the bottom half of the table in IPL 2022 was the lack of depth in their side. Alex Hales’ inclusion might be the solution to the experience problem faced by KKR. Hales can partner Venkatesh Iyer in the top and the left-right combination might bode well for the team.

MS Dhoni’s CSK might put their eyes on aggressive English batter Alex Hales. CSK always has had a knack of entrusting in a foreign opener and that was visible in IPL 2022 as well. With CSK finishing second-last in IPL 2022, the Yellow Army are bound to bring in some new enforcements. The aggressive opening duo of Devon Conway and Alex Hales can bring glory to the misfiring franchise. The 4th foreign bowler in the form of Maheesh Pathirana would then be replaced by an Indian bowler. The other foreigners in CSK then would most likely be Devon Conway, Moeen Ali and Mitchell Santner.

Another franchise that had a disastrous IPL 2022 was Kane Williamson’s SRH side. The SRH franchise finished 8th in the tournament and the lack of firepower in their squad was quite visible. Kane Williamson’s bad form too added fuel to the fire. The young and inexperienced opening duo of Priyam Garg and Abhishek Sharma did not impress according to their capabilities. The inclusion of a fiery Alex Hales in the side might propel SRH to challenge for the IPL trophy in 2023.

Also read: IND vs AUS: Lathi Charge On Fans As They Protest Outside Hyderabad Stadium While Buying Tickets; Watch