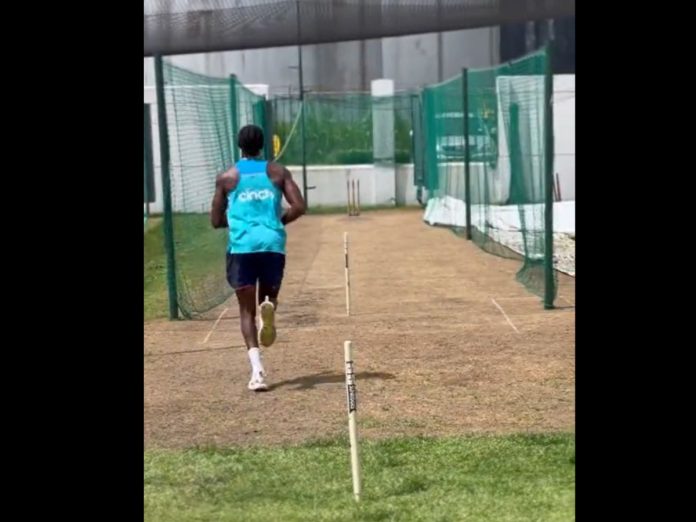 One of the most talented and explosive bowlers of our generation, Jofra Archer has carved a niche for himself. He has been breathing fire whenever he got an opportunity to bowl and is one of the most intimidating bowlers.

However, recurrent injuries have marred his playing career. His international assignment was way back in March 2021 when he played a T20I international against India and he has not played competitive cricket since May 2021.

The entire year of 2022 has gone in his rehabilitation and this definitely was a major blow for the England cricket team and also for Mumbai Indians (MI), who signed him in the IPL 2022 Mega auctions for a lofty amount.

Jofra Archer has now shared a video of him bowling in the nets. Notably, he has not been named in England’s ICC T20I World Cup squad because of his injury. The video was posted on Tiktok by the star bowling all-rounder himself. England’s “Barmy Army” had then shared it on other platforms and the video immediately took off.

🚨 JOFRA IS BACK BOWLING 🚨

This is definitely a bright and positive news for both the England Cricket Team and MI, With the ICC ODI World Cup 2023 slated to take place in India, Jofra Archer could then eye for a comeback in 2023.

This would also mean that he would then play for MI in IPL 2023. MI had bought Archer for a whopping Rs. 7.20 crores and a lethal bowling duo of Jasprit Bumrah and Jofra Archer would send shivers down the spines of the opposition batters.

The MI team management would be hoping to have Jofra Archer back. In the video which has been shared by Archer, he seems to have recovered from his injury and this means he would be playing in IPL 2023.

Also read: IPL 2023: 3 Coaches Who Will Be Making Their Debut In The Coming Edition