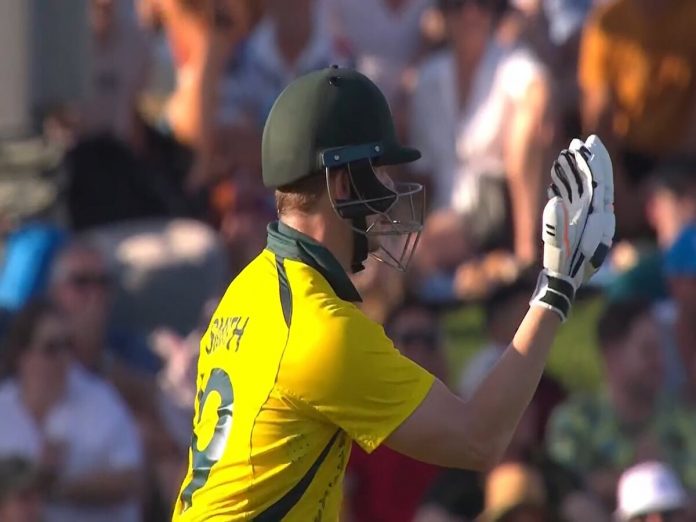 In the first innings of the final ODI match between Australia and New Zealand, Team Australia hitter Steven Smith had remarkable mental fortitude, earning his team a free hit.

The spectacular century by the right-handed batsman gave his team a commanding lead after the first innings. Before getting bowled out by left-arm spinner Mitchell Santner, Smith scored 105 runs off 131 balls while smashing 11 fours and one maximum.

Australia’s Steven Smith ended a long wait for an ODI century in 2022 by scoring an international century for the second time. While Smith’s most recent ODI century was against India more than 21 months ago, it is interesting that throughout this time he only appeared in eight ODIs before today.

Smith and Marnus Labuschagne (52), who were up against a focused bowling assault on a somewhat sluggish surface, could only muster 17 runs over the course of the following 10 overs. But Smith’s first boundary of the innings came just after the 10-over point, displaying his first displays of aggression at Cazaly’s Stadium today.

Five fielders outside the 30-yard circle

In the 38th over of the first innings, when the Australian batsman went up against James Neesham, he blasted the bowler over midwicket to get six runs. Smith undoubtedly went for the massive shot because as soon as he reached the boundary, he glanced straight at the leg umpire and motioned to him that there were five fielders outside the 30-yard circle.

Steve Smith launching a filthy slog over the fence because he knew it was a no-ball due to the number of fielders outside the circle 🤯#AUSvNZ #PlayOfTheDay pic.twitter.com/T3LFFjsCB8

However, Neesham bowled a slower bumper outside the off-stump as Smith missed his shot, preventing the right-handed batter from benefiting from the free-hit delivery.

Didn’t think too much about it

The Men in Yellow reached 260 runs in their allowed 50 overs thanks to some late hitting from Glenn Maxwell, Alex Carey, and Cameron Green, as was already indicated, and Smith’s magnificent fifty.

“Had to take our time early, to give ourselves a chance and build a partnership. I was just batting simply early on, and didn’t think too much about it. And when I decided to take more of a chance, I was hitting with the wind. I think we have a strong total on the board,” Smith said during the mid-innings break.

The host team will aim to win the series finale and bid farewell to skipper Aaron Finch, who is playing his final game in the 50-over format.