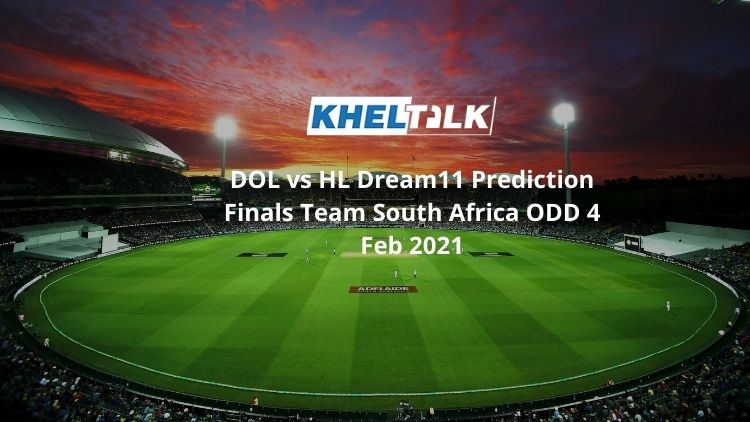 Here are the stats for the team’s DOL vs HL

The surface offers a good amount of bounce to the bowlers. Bowlers are likely to dominate in the initial overs, but momentum will, later on, shift in favor of batsmen.

There are chances of rain but hopefully, we believe rain would stop quickly so that we can have a good game of cricket.

We Suggest you wait for the toss and choose your team wisely. Spinner won’t help you earn points here. Batsmen and pacers will get enough assistance from the pitch.

Dolphins have thrashed Lions thrice in their last five meetings. The same is expected here.

Lions have faced more defeats against Dolphins. They have a chance to turn things around.

Lions would step with the combination which they played against Warriors.

D Potgieter has smashed 159 runs in four innings at an average of 79.50. Don’t miss him out. He even has three wickets to his name.

G Roelofsen has scored maximum runs for Dolphins so far. In three innings, he has 191 runs at a strike rate of 63.66.

R Frylinck has an all-round performance. With the bat, he has scored 129 runs in three innings along with five wickets.

B Fortuin has been lethal with the ball. In 4 innings, he has chipped seven wickets at an economy of 4.33.

Second highest run-getter for Dolphins this season and has been lethal with the ball.

Swardt has contributed well with the ball alongside Muthusamy and Frylinck.

Another asset Lions can rely on. He can be dangerous.

Phangiso has played some good cricket for the Lions and is expected to do the same.

Here is the Dream 11 Team prediction for DOL vs HL are going with players who are currently in good form and can win the match with ease.

Head To Head Team For Dolphins vs Highveld Lions

Who Will Win Today Between DOL vs HL Dream11 Prediction, Finals?

According to Kheltalk’s astrology DOL vs HL Dream11 match Prediction, the Dolphins will win the match.

According to Kheltalk’s DOl vs HL Dream11 toss prediction, Dolphins will win the toss and will bowl first.