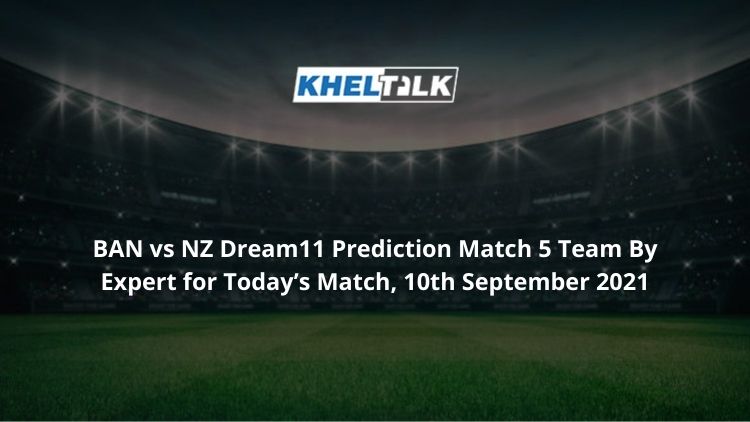 Now, the team leads the Blackcaps by 3-1. They are likely to rest their major players in order to test the bench strength here.

The pitch will be on the slower side and the toss doesn’t make much difference here. The batting will be difficult either way. In the recent Australia series, the highest score at this venue was 131. The pitch is expected to behave the same way here as well.

It is going to be a rainy day in Dhaka. According to the forecast, there will be scattered thunderstorms and the temperature will oscillate between 29-32 degrees Celcius.

Since this is a dead rubber, the team is likely to test their bench strength and are likely to rest Shakib Al Hasan as well as Mushfiqur Rahim. The team has all the license to do the same here as they have already won the series.

The second-string squad might not be as strong as their first choice but they do have a good line-up. Unfortunately, they couldn’t end up on the right side of the result. They will be looking to finish off the series on a good note here.

Will Young was the only star performer with the bat for New Zealand in the last contest. He added a good cameo while wickets fell around him. One can expect him to come up with something special here.

Ajaz Patel has been bowling well at the moment. He has picked up wickets at regular intervals and has managed to produce dot balls too. He will be the key player here as well.

Rachin Ravindra will be opening the batting as well as the bowling for the team. He is yet to perform big here but one can expect him to score at least a cameo and pick up a couple of wickets here.

Finn Allen couldn’t convert his starts to big score here. He is one of the key players in this team and one can expect him to lead the team from the front here.

Tom Latham will hold the key in the middle order for the team. He is the most experienced player available in this contest and one can expect a good knock from him today.

Mahmudullah played well in the last match. He held his nerves to chase a low-scoring total in the last contest and led the team from the front.

Shakib Al Hasan and Mustafizur Rahman are unlikely to play in this contest but if they do, they are one of the popular picks for the captain for obvious reasons.

Who Will Win Today Between BAN vs NZ Dream11 Prediction, 5th match?

According to Kheltalk’s astrology BAN vs NZ Dream11 match Prediction, New Zealand will begin this contest as the favorite to win this contest. Though the team is coming up after a series loss here, they will be keen to end this one on a high note.

According to Kheltalk’s BAN vs NZ Dream11 toss prediction, Bangladesh will win the toss and will bowl first here. The team had tasted success while chasing the target in recent times and thus, they are likely to do the same here.