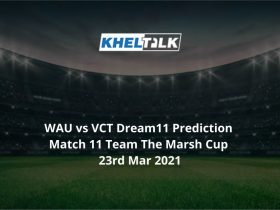 Here are the stats for the teams BN-A vs IR-A:-

The surface is a good one to bat on. However, there will be support spinners. We can expect them to dominate here.

The weather forecast is positive and it will be a good game of cricket at Chattogram on Friday.

Since the pitch will offer support for spinners, it’s good to go with more number of them here. Also, it’s wise to pick more all-rounder in this contest.

Bangladesh have a solid squad here and the players like Hridoy makes it even more special.

Ireland has some of the well-known players in the team here. A lot of them are currently in the Ireland senior squad as well and will be the team to beat for sure.

He has been Ireland’s consistent performer in the ODIs and we can expect him to come good here.

Tanvir Islam was the star performer in the Test match. He had 13 wickets to his name including 8 wicket haul.

Harry Tector- He will be the player to watch out for in this contest. He played the spin well in the last match and in fact, had a fifty to his name.

Yasir Ali is a game-changer. He has been in a good form for a long time now. In the Test match, he made a brilliant half-century.

James McCollum is in good form at the moment and can be backed for quick runs in this contest.

In the series against the UAE, Tucker was one of the top-scorers. He looked in good touch and can repeat the same here.

He could be someone who can take the team home in this contest, thanks to his international exposure. It will be interesting to see if he opens the innings today.

Who Will Win Today Between BN-A vs IR-A Dream11 Prediction, 1st ODD?