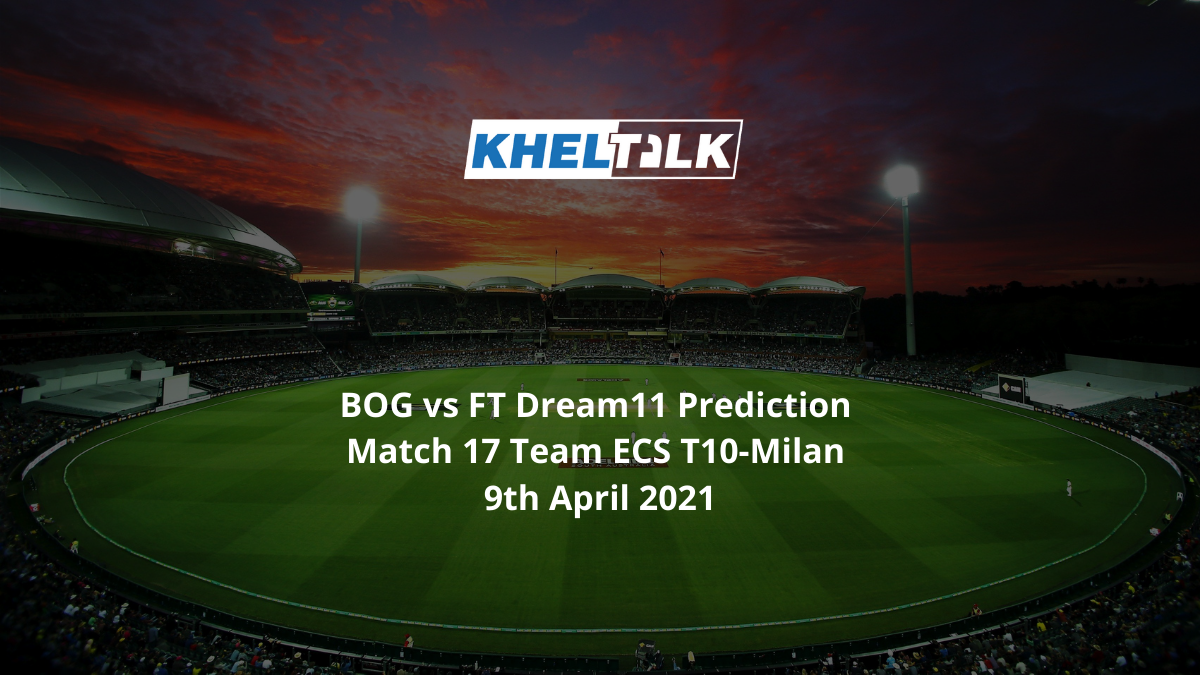 According to BOG vs FT Dream11 Prediction for Today’s Match Fantasy Cricket, Bogliasco will take on Fresh Tropical in the 17th match of the ECS T10 Milan on Friday, 9th April, at the Milan Cricket Ground. Keep reading to find out about the ECS-T10 Milan Match 6th BOG vs FT Dream11 team today.

Both the teams – Bogliasco and Fresh Tropical have qualified for the league stage of the ECS Milan tournament. Bogliasco topped the Group A points table beating Pioltello United by 8 wickets in their opening game and later on thrashed Milan Kingsgrove and Bergamo Cricket Club by 13 runs and 5 wickets respectively.

On the other hand, Fresh Tropical qualified for the League stage with three wins in four games beating Milan United by 25 runs and Milan Cricket Club by massive 90 runs. The only defeat Fresh Tropical tasted was against Albano where they lost the game by 8 wickets. In the most recent game, Fresh Tropical faced Bergamo Cricket Club where Tropical had to chase down the target of 109 and they easily notch the victory by 8 wickets and 8 balls remaining.

Here Are The Details and Dream 11 Match prediction For The Match BOG vs FT:

Here are the stats for the teams BOG vs FT:

The surface at Milan has been favoring batsmen more as compared to the bowlers. Talking of the spinner, they will have to toil hard for the wickets as they will not get many twists and turn.

The temperature is expected to be around 15 degrees Celcius with the humidity of 36% and wind speed around 11 km/hr. There is no chance of rain at all.

Pick more batsmen at this venue. Make sure, you go with the combination of 6:5.

M Imran is the highest run-getter for the side. Playing four innings, he has scored 178 runs at an average of 59.63 and has a strike rate of almost 300. Hitting 20 sixes in four innings surely needs skills and talent. Don’t miss him out.

Zain Naqvi has also been consistent with the bat. Scoring 109 runs in four innings makes him an x-factor player for Tropical. Averaging around 36.33, Naqvi has a strike rate of 222.44 including 9 four and nine sixes.

Niranga Malameege is the leading wicket-taker for Bogliasco, chipping seven wickets in three games at an economy of 7.00. He has regularly troubled the batsmen with his variations and is likely to do it again.

Who Will Win Today Between BOG vs FT Dream11 Prediction, 17th Match?

According to Kheltalk’s astrology BOG vs FT Dream11 match Prediction, the BOG will win the match. Both the teams have got a solid lineup with few influential names, but the Fresh Tropical bowling lineup hasn’t been up to the mark and this disadvantage will surely cost them this match.

According to Kheltalk’s BOG vs FT Dream11 toss prediction, BOG will opt to bat first and will opt to bowl first as they would want to chase against Fresh Tropical because of their bowling options.