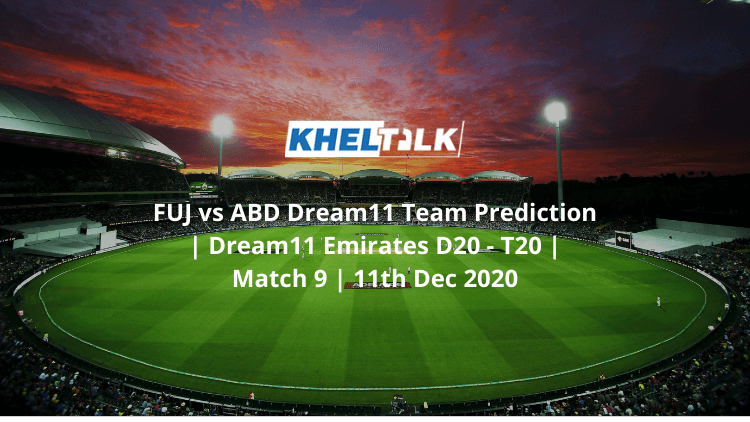 Abu Dhabi has had a poor start to the Emirates D20 Cup as they have lost their first two games. The team has failed to make an impact so far and now they get a chance to earn their first points of the tournament as they meet Fujairah on 11th December. Their task isn’t easy by any means as FUJ has won both its first two games in this series and has been undefeated so far.  Let’s go through our Dream11 Team Prediction for the upcoming game of the Emirates D20-T20 Cup between FUJ and ABD.

This is a batting-friendly surface so expect runs to flow. However, the bowlers might find some purchase if they vary their pace and be innovative.

R Mustafa is the key player for Fujairah as he is highly experienced and is an impact all-rounder. He started the tournament by scoring 39 runs from 43 balls and then in the second made a stellar fifty by scoring 62 runs from 53 balls. He is in prime form with the bat and has made vital contributions with the ball too and has picked 1 wicket.

Waseem Muhammad has been rock solid at the top of the order. He has batted consistently in both the games so far. He made 34 runs from 30 balls in the first game and then looked very promising in the second match as well as he made 13 runs from 19 balls. Considering his form and his run-scoring ability, he is a very good choice for captain.

Usman Khan made only 10 runs from 14 balls in the last game but he is a high-quality batsman and he showed his class in the first game when he scored 50 runs from 34 balls. So he is a must-have batter in the team as he can provide strength to the middle order and has a good chance to add to his runs tally.

M Pattlikkadan scored a duck in the first match but made a great comeback as he scored 42 runs from 32 balls in the next game. He has been very effective with the ball too and has picked 2 wickets each in both innings so far.

FUJ vs ABD Dream11 Prediction: Who will win the match

The likes of R Mustafa and W Muhammad give tremendous strength to FUJ. On the other hand, Abu Dhabi has failed to find the right balance in the team. Hence our Dream11 Team Prediction experts have predicted that FUJ will easily win the game against ABD.