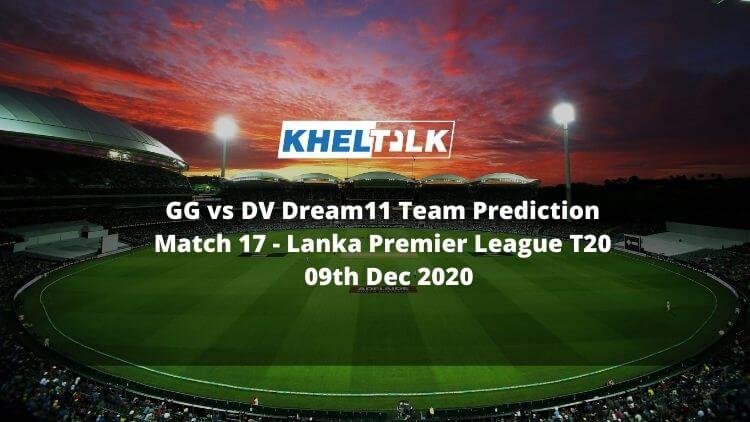 Galle Gladiators have failed to find their mojo in the Lanka Premier League so far and have won only one game out of six games. They are placed at number 4 currently and need more wins to keep themselves in the content for the semi-finals. On the other hand, Dambulla Viiking is in fine form and are placed second with 4 wins in 6 games. So, let’s go through our Dream11 Prediction for the upcoming Lanka Premier League game between GG vs DV

The break of one day should rejuvenate the wicket and make it fresh and more batting-friendly but at the same time the bowlers especially the slower ones will get purchase from this wicket.

MD Gunthalika has been the most consistent batsman for his team. The southpaw has batted aggressively and has been very consistent. He has made 322 runs in 6 innings and has made 3 fifty-plus scores. He has a strike-rate of 145.04 and has a stunning average of 64.40. His staggering consistency and form make him the perfect choice for captain.

After failing to perform in the previous games, Mohammad Amir came back to form and breathed fire in the last game against Colombo Kings. He picked 5 wickets and gave away just 26 runs. The five-wicket haul showcased his bowling process and now that he is back in form, he is a big threat for the opposition teams.

MD Shanaka has been rock solid for his team. The batsman has made 236 runs at an average of 47.20 and has a strike-rate of 169.78. He has made 2 fifties and has 73 as his highest score. He is in fine form and his incredible batting ability makes an ideal option for vice-captain.

GG vs DV Dream11 Prediction: Who will win the match

Dambulla has got its key players in great form. This gives them an edge in this contest. So in this match expect Dambulla to win the game. Our Dream11 Prediction experts have predicted a crucial and nail-biting encounter. However, they have given an edge to Dambulla Vikings over their opponents.