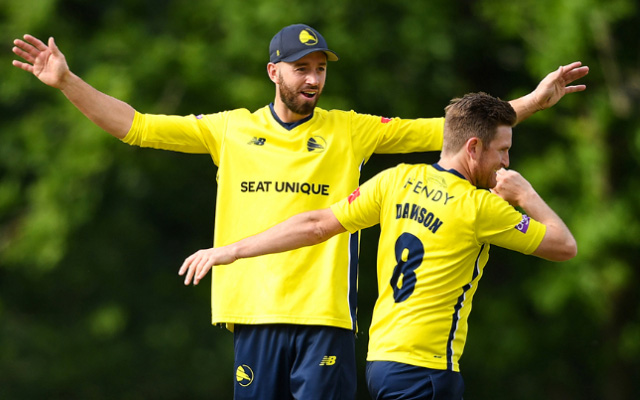 Glamorgan and Hampshire will lock horns in the South Group today. Hampshire had won their last meet by six wickets and will begin this contest as favorites as well. Glamorgan is in the eighth spot in the points table while Hampshire is in the fifth spot.

This is a good batting pitch and we have seen some high scores in recent matches. There is going to be something for the pacers as well. The average first innings score in T20s is 166 here.

The temperature will be around 16 degrees Celcius for the most part of the day and it gets warmer with time. There is a 20 per cent chance for drizzles but it is unlikely to take over the match.

After a poor start to the tournament, the team did well to bounce back to win their last three matches in a row. They will look to win this one as well and a win here could take them to the third spot.

Glamorgan will need a win here. They had lost four matches out of their seven and have won only two matches so far. They are in the bottom half of the table and a win here could take them a bit higher.

Northeast is the leading run-scorer for Glamorgan this year. He has 220 runs with an average of 44. He has scored a couple of half-centuries in the tournament.

Hogan is the leading wicket-taker for Glamorgan in the tournament. He has 14 wickets from his seven matches with the best of 5/18. He is a must-have pick here.

James Vince needs no introduction. The England opener has 225 runs from his six matches with an average of 45. He has 24 boundaries and four sixes to his name.

Ben McDermott could prove vital in this contest. He has 241 runs from his seven matches with a strike rate close to 168. He also has six catches and a stumping to his name.

Who Will Win Today Between GLA vs HAM Dream11 Prediction, South Group?

According to Kheltalk’s GLA vs HAM Dream11 toss prediction, Hampshire is likely to bowl first here. The pitch will not change much during the course of the game.