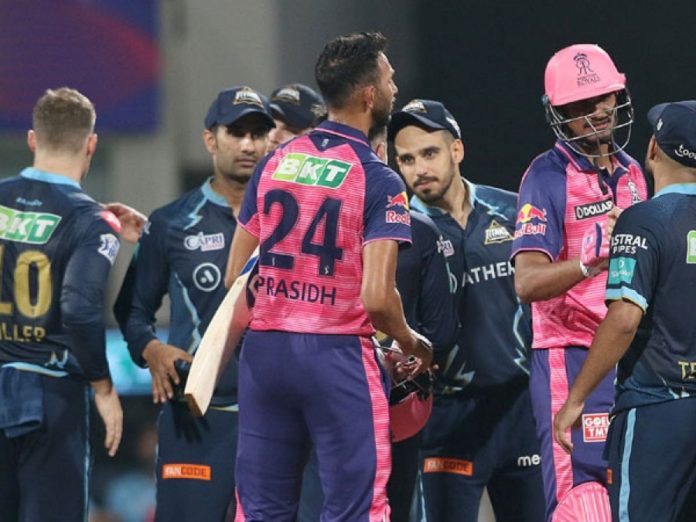 Gujarat Titans and Rajasthan Royals will lock horns in the final of the IPL 2022. Gujarat have dominated against Rajasthan in the last two occasions they met in the IPL, winning the Qualifier 1 by seven wickets and their league match by 37 runs. They will begin this contest as favourites. Also, In the league stages, Titans had finished at the top of the table with ten wins from 14 matches while Royals had won nine matches.

Going by what we have seen so far here, This is going to be a high-scoring contest as the pitch assists the batters more. Anything below 180 is easy to chase at this venue. The spinners will have a job to do here

Recent 5 matches result at the venue:

Gujarat Titans have been the best team in the tournament so far. They have won 10 matches from their 14 outings and proved too good for Rajasthan Royals in the Qualifier 1. Shubman Gill has given them an excellent start at the top while Hardik Pandya has been the best player in the middle order. David Miller and Rahul Tewatia have managed to finish matches for them regularly.

Undoubtedly, Rajasthan has been the second-best team in the tournament. However, they have failed against Gujarat Titans this season. They will look to find a way to get past the Titans here. Jos Buttler and Yuzvendra Chahal are in outstanding form at the moment and will lead the batting as well as bowling attack of the team respectively.

David Miller is the leading run-scorer for Gujarat Titans at the moment. He has 449 runs with the best of unbeaten 94 and has scored 22 sixes in the tournament so far.

Mohammad Shami and Rashid Khan are the leading wicket-takers for the Titans at the moment. Rashid has 18 wickets while Shami has 19 wickets to his name.

Hardik Pandya can contribute from both fronts and is likely to play a major role here. He has five wickets as well as 453 runs in the tournament so far.

Jos Buttler is the leading run-scorer of the tournament. He has 824 runs with four hundreds and as many fifties to his name. He has scored 78 boundaries and 45 sixes in the tournament.

Yuzvendra Chahal is the leading wicket-taker for Rajasthan Royals with 26 wickets to his name. He has the best of 5/40 and has an economy rate of 7.92 in the tournament.

Who Will Win Today Between GT vs RR Dream11 Prediction, Today’s Match

According to Kheltalk’s astrology GT vs RR Dream11 match Prediction, Gujarat Titans will begin this contest as favourites. As mentioned earlier, Titans have won both their matches against Royals and will look to make it three in a row here and will look to lift the trophy in their inaugural edition.

According to Kheltalk’s GT vs RR Dream11 toss prediction, Gujarat Titans will win the toss and opt to bowl first. The team has a better record while chasing and had won their last head to head contest while chasing.