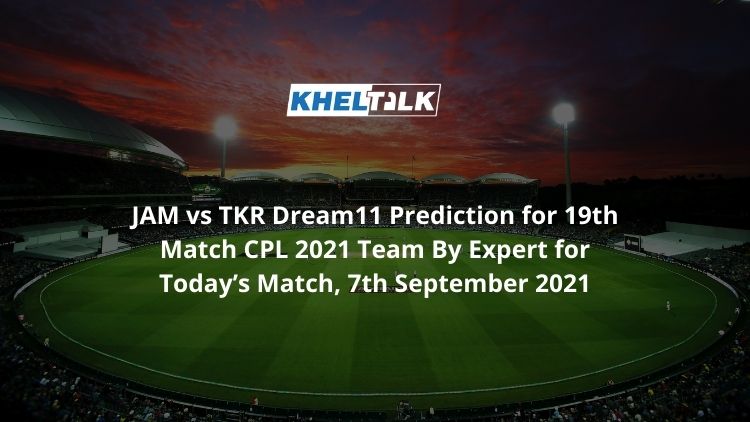 Tallawahs and Knight Riders will lock horns once again in this year’s CPL. In the last head-to-head contest, Knight Riders proved too good for the team. They had chased down 145 with ease and won the match by seven wickets.

TKR destroyed the top order of the team but Imad Wasim and Brathwaite brought the team back to a decent position. However, that wasn’t enough as the defending champions won the match within 18 overs.

Talking about their tournament so far, Tallawahs are at 5th position with two wins to their name while TKR has won three and have lost three; are at third position in the table.

This is a good batting track and will offer a lot of support to pacers. The chasing has been easier at this venue in recent times, and of course, most teams have preferred bowling first. One can expect this match to be a low-scoring thriller for sure.

The team has had a moderate tournament so far. Unlike last year, they couldn’t pull off wins with ease and had to work hard for the same. They are in need of a win here to finish in the top two of the tournament.

The team needs something big from Andre Russell and Carlos Brathwaite in the batting department. The latter might miss the initial competition as he was in isolation. A lot will depend on Chris Green as well. Qais Ahmad will lead the bowling attack for the team.

After multiple starts, Simmons had finally managed to convert them to a big score. He was the difference between two teams in the last contest. He made 70.

Andre Russell needs no introduction at all. He had a decent outing in the last contest. He batted late, but was able to add 8-ball 20* to the total and was also economical with the ball.

Imad Wasim was the stand out performer in the last contest. He dragged the team to a good total after they had lost early wickets. He made 42 runs and also picked up a couple of wickets.

Carlos Brathwaite scored a fifty in the last contest. It wasn’t his usual attacking innings but he had managed to save the team from the disaster and is likely to dominate here as well.

Migael Pretorius has been the team’s best bowler so far. He has picked up at least a wicket in almost all the contests so far and he is likely to do the same here as well.

Kieron Pollard had a mixed tournament so far but is very capable of turning the tables here. If the team is batting first, he will hold the key and will be playing the finisher role here.

Ravi Rampaul has been the pick of the bowlers here. He has been consistent and is likely to grab at least a wicket or two in this contest.

Similarly, Akeale Hosein has provided the team early breakthroughs. He is likely to open the bowling once again. In the last match, he had a couple of wickets to his name.

Who Will Win Today Between JAM vs TKR Dream11 Prediction, 19th match?

According to Kheltalk’s astrology JAM vs TKR Dream11 match Prediction, TKR will begin this contest as the favorites to win this contest. TKR is in good form at the moment and has managed to win the last contest. On the other hand, Tallawahs also have a good line-up and this match is likely to go down the wire unlike the last one.

According to Kheltalk’s JAM vs TKR Dream11 toss prediction, Tallawahs will win the toss and will bowl first here. Both teams will look to chase at this venue as most of the matches went to the team batting second. Also, Tallawahs went down while batting first in the last contest.