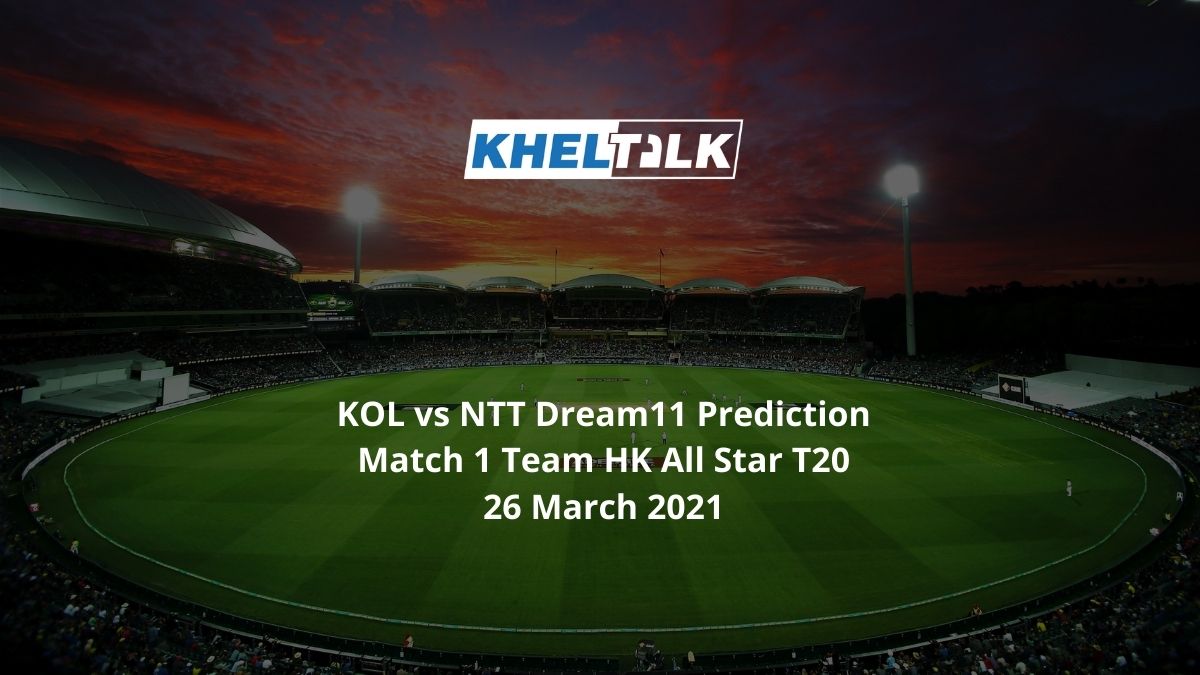 According to KOL vs NTT Dream11 Prediction for Today’s Match Fantasy Cricket, Kowloon Lions will take on New Territories Tigers in the 1st match of the HK All Star T20 on Friday, 26th March, at the Tin Kwong Road Recreation Ground in Kowloon. Keep reading to find out about the HK All-Star Match 1 KOL vs NTT Dream11 team today.

Unlike other years, HK All-Star series will see only three teams this year because of obvious reasons. All the three teams will play a league match against each other and the final of the match will take place on 27th and be played by the top two teams of the league.

Despite the less number of teams, the competition does promise something special as there will be a plethora of stars from Hong Kong going head to head against each other. This tournament is a much-needed one to get the game back to the country after the pandemic.

Here are the stats for the teams KOL vs NTT

This is a natural turf ground filled with grass on top. Going by previous records, the ground will assist the batters more and there will be something for the spinners. We can expect both teams to go for a big batting line-up and most of the teams will begin to bat first here. The pitch gets slower in the 2nd innings and the spinners, once again, will come in handy there.

One good thing about having games at this time in Hong Kong is the climate. There will neither sun nor rain here. Mostly covered by clouds, the breezy weather will be assisting the bowlers by some sorts. Having said that, the small ground will act as an added advantage for the batters.

Since this is the first match of the contest, it is good to wait until the announcement of the line-up to make necessary changes to come up with the perfect team. For the starters, it is good to go with more number of players from team KOL who were unbeaten last year and make sure to have more all-rounders in the team.

The team has one of the best line-ups here and most of them feature in the international squad. All eyes will be on Aizaz Khan as he will be leading the team KOL.

With some of the best senior players in the squad, NTT are looking good on papers. Players like Babar Hayat, Aftab Hussain, Sheryar Khan are every opponents’ nightmare. Adit Gorawara is probably the best keeper in the tournament and the team will begin this contest as favourites.

Nizakat Khan’s experience stands out as he has been around for a while now. He is the team’s best man when it comes to batting and has a good strike-rate, close to 126. He has played more than 40 T20I in his career and is the player to watch out for in this contest.

Nobody has performed well, better than Aizaz Khan in recent times. The skipper has been contributing from both fronts and is more of a bowling all-rounder. Still, he has played the finisher role for a lot of matches and today will be no different. He has more than 40 wickets and 300 runs in his career.

The skipper Kinchit Shah has been one of the well-known names in the international circuit. He can do wonders with both bat and ball. He is one of the players to score more than 500 runs in T20Is from Hong Kong and has been their backbone for a long time now. With more than 30 T20Is to his name and with a strike-rate over 110, he can be a good pick for captain.

Babar Hayat is yet another player with excellent domestic numbers to his name. He, in fact, has a ton in this format and has a healthy strike-rate, close to 126. Undoubtedly, a must-have pick in any fantasy team.

The youngster Dhananjay Rao had a good run in under-19s recently and rarely went wicketless there. The pacer will come in handy in conditions like these and is very useful with the bat as well. He has 11 wickets from his recent 10 appearances.

Adit Gorawara is a much better player than what his number suggest here. He has been excellent with the glove and in his List-A career, he averages close to 22 with a decent strike-rate. Since catches grab us fantasy points, Gorawara can prove crucial in that way.

Who Will Win Today Between KOL vs NTT Dream11 Prediction, 1st Match?

According to Kheltalk’s astrology KOL vs NTT Dream11 match Prediction, the KOL will win the match. Though NTT has a huge number of experienced players in the team, KOL has more number of in-form players and those who are hard-hitters. Since this is T20, one can prefer hard-hitters here.

According to Kheltalk’s KOL vs NTT Dream11 toss prediction, KOL will win the toss and will bat first. Since batting second becomes different due to the slowness in pitch, most teams prefer to bat first here.