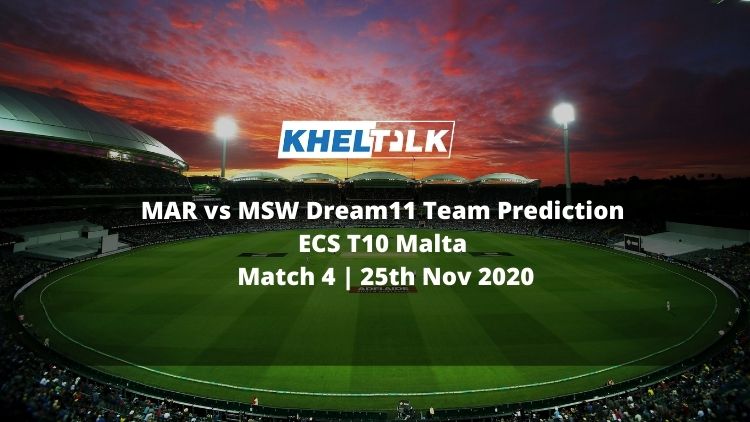 Marsa CC and Msida Warriors CC will lock horns in the fourth match of the tournament. Marsa CC were the runners-up in the last domestic league and finished third in the recently concluded Summer League. On the other hand, Msida Warriors CC are the underdogs in the tournament. They recently finished fourth in the Summer League where they lost to the Marsa CC in the 3/4 place clash. Let’s go through our Dream11 Prediction for the upcoming game of ECS T10 Malta between MAR and MSW.

The team will enjoy batting first at the Marsa Sports Club as the conditions tend to get difficult to bat during the second innings. In recent T20 matches, the teams have successfully managed to defend scores like 120.

Zeeshan Khan will be opening the innings for his team and is looking in good touch. This year, in the domestic T20, he has 239 runs with an average close to 40 and has a strike-rate of 117.16.

Waseem Abbas has played 19 T20 matches in his career and has scored 133 runs with the strike-rate close to 162.20. He will be contributing with the ball too and has picked up 16 wickets in his career.

The skipper Rahul Nair will be looking to lead the team from the front. In 2020, Nair has played 6 T20 matches and has scored 95 runs with the strike-rate close to 132. He also has picked up 5 wickets so far.

Haroon Mughal will be batting at number five or six for the team and has vast experience. He has 452 runs from his 25 innings with a strike-rate close to 135. He also has 9 wickets to his name in his career.

MAR vs MSW  Dream11 Team Prediction: Who will win the match

Going by the recent form and the recent Head-Head fixtures, Msida Warriors CC are the huge favorites to win this match.