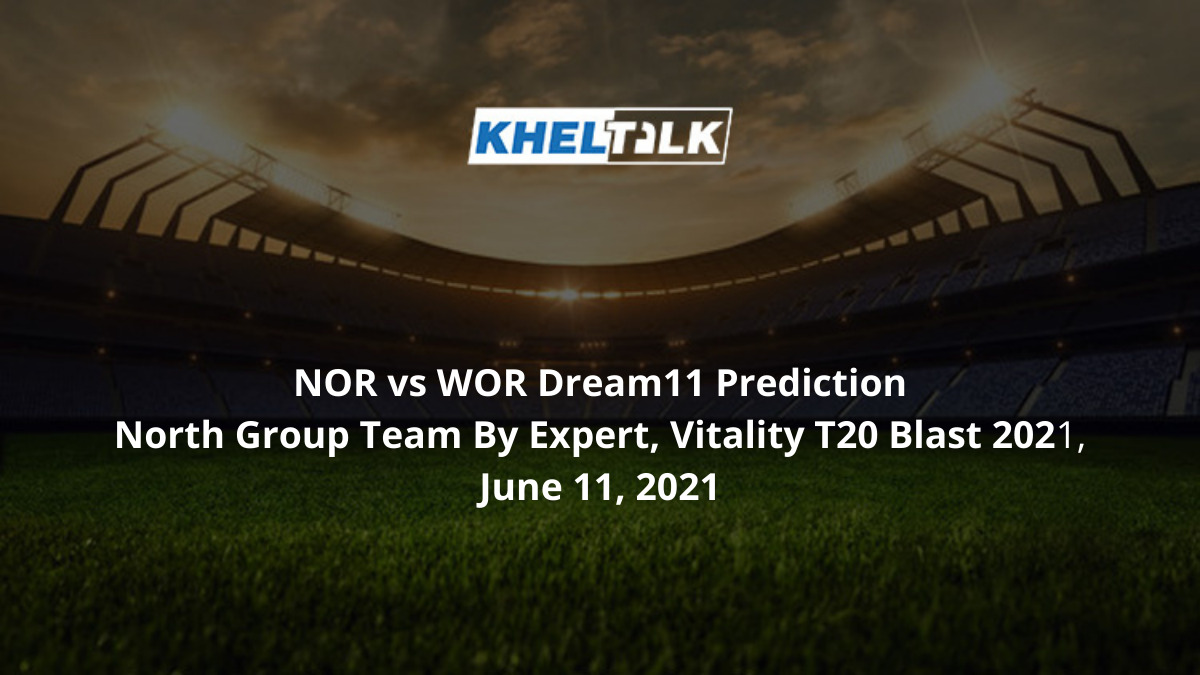 Northamptonshire will begin its 2021 Vitality Blast journey today. The team has a few prominent players but will be largely affected by the absence of Paul Stirling. The team ended at the 2nd spot in the Central Group last year with four wins to their name. However, the team do have some in-form players in their line-up. Though inexperienced, their bench strength is stronger than any other teams in the tournament.

On the other hand, Worcestershire will be playing their 2nd match today. They tied their first match against Nottinghamshire. The team had managed to take the match until the end despite scoring only 152 on a good batting track. Jake Libby dominated with the bat and their spinners took care of the rest.

NOR vs WOR Match Prediction

The pitch is a good one to bat on and there will be an ample amount of support to the spinners. Out of 41 matches, 22 of them went to the team batting first while 19 went to the chasing team. The highest score at this venue is 219 and the average first innings score is 171.

The climate at County Ground, Northampton is likely to be cloudy for the whole day. The temperature will be around 17 degrees Celcius for the most part of the day and is likely to go to 13 degrees Celcius during the match time. There is a six per cent chance for rains.

The team has a good batting depth but do lack a lot of experience when it comes to the pacers. With the presence of Moeen Ali and Ish Sodhi, the spin department looks excellent and all covered.

The team will miss Mohammad Nabi here. The all-rounder is currently in quarantine and will be available for the next match. However, the team do have a good line-up, thanks to the presence of Wayne Parnell and the form of players like Cobb.

Moeen Ali is coming into the tournament after a brilliant stint with Chennai Super Kings in the IPL. In the first match, he opened the bowling for the team and ended up picking up two wickets while giving away just 15 runs.

Ish Sodhi will compliment Moeen Ali here. He is an essential pick considering his current form and the condition. In the last match, he had a wicket while giving away just 27 runs from his four overs. He is useful with the bat too.

Jake Libby batted well in the first contest and is likely to do well in this match too. He scored 52 runs while most of the players struggled and took just 43 balls for the same. The knock had three fours and he could be the difference between the two teams today.

Richard Levi is in excellent form at the moment. In the practice T20 matches, he smashed back to back half-centuries and a couple of matches ago, he scored 98 runs from just 46 deliveries. The knock had seven mammoth sixes.

NOR vs WOR- Top Picks by Experts

Brett D’Oliveira was one of the stand-out performers for the team last year and is likely to dominate in this contest. In the last match, he bowled a couple of overs and gave away just eight runs.

Ricardo Vasconcelos has the most number of runs in the last year in the first-class tournaments. One can expect him to come up with something special today.

When these two teams met in the last year, Ed Barnard was the player of the match. He ended up picking a couple of wickets while giving away just 15 runs.

Head to Head Dream11 Team Prediction NOR vs WOR

Wicket Keepers– A Rossington, B Cox

Who Will Win Today Between NOR vs WOR Dream11 Prediction, North Group?

According to Kheltalk’s astrology NOR vs WOR Dream11 match Prediction, Team NOR will begin this contest as underdogs because of the lack of experience in their line-up. Nabi’s absence might prove costly in this contest. However, they will not go without a fight.

NOR vs WOR Toss Prediction today

According to Kheltalk’s WOR vs NOT Dream11 toss prediction, WOR is likely to bowl first at this contest. Since the toss doesn’t make much difference here, the teams are likely to prefer chasing at this venue as both teams have good batting depth.