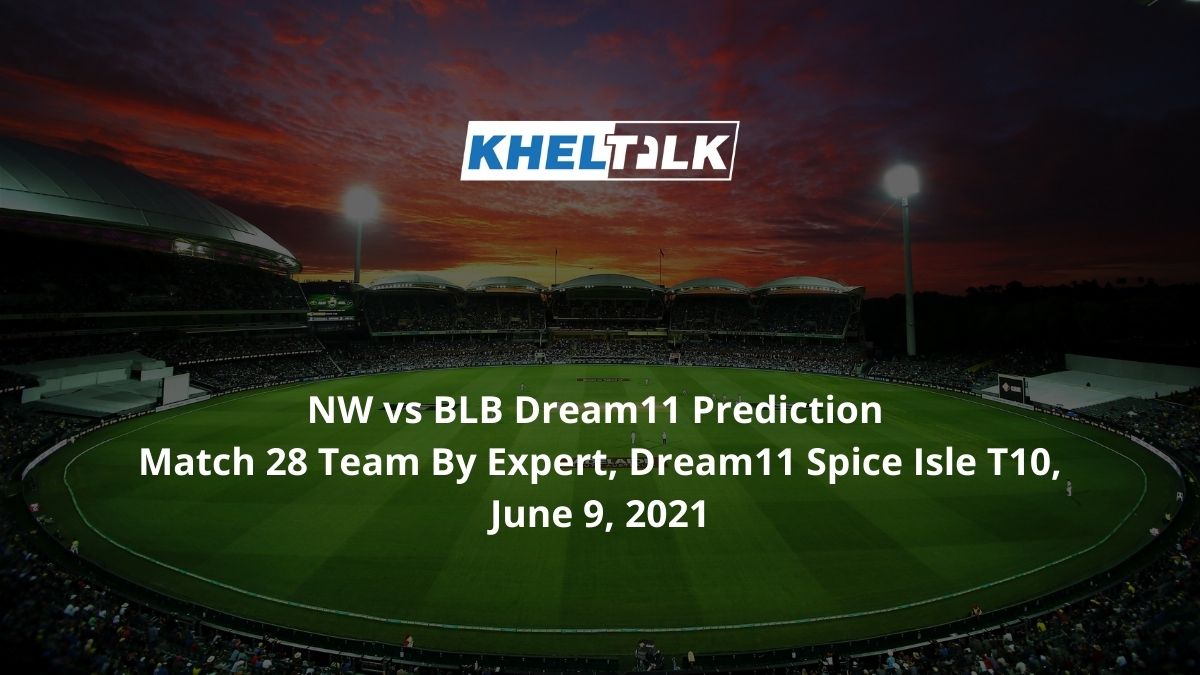 Welcome to NW vs BLB Dream11 Prediction for Today’s Match Fantasy Cricket. Nutmeg Warriors will take on Bay Leaf Blasters in Match 28 of the Dream11 Spice Isle T10 on Wednesday, June 9, 2021, at the National Cricket Ground. Keep reading to find out about the Match 28 NW vs BLB Dream11 team today.

Nutmeg Warriors, despite having some of the star players in their line-up, couldn’t manage to win more matches and they are at the bottom of the table at the moment. They have lost five matches out of their eight and have won only two matches.

The pitch at National Cricket Ground is currently a batters’ ally. Most of the matches here were high-scoring ones and have gone down to the wire. The average first innings score at this venue at the moment is 91 and the team chasing have won the most number of matches here. 13 matches out of 24 were won by the team batting second.

Wednesday at Grenada will be a cloudy one. It is a bit of relief considering the climate for the past few days at this venue. According to the forecast, there is a 20 percent possibility for rain and one can expect the climate to be around 31 degrees Celcius for the most part of the day.

It is good to go with more batters and all-rounders here. Andre Fletcher is the must-have pick here. Denis Smith and Devon Smith are the other two players who could prove vital here.

Despite having a good line-up, the team is hugely dependent on Andre Fletcher. Though he has done well in the tournament so far, it is not enough for the team to pull off more wins. The team needs something special from someone else to stay in the line.

After multiple poor performances, Bay Leaf Blasters have found their way to stay at number four in the points table. They have managed to win their last match by 10 wickets which should give them huge confidence going into this match.

Andre Fletcher is undoubtedly the best choice for the captain in the fantasy side. He is in good form, has scored 245 runs with a strike rate close to 250, and also is among wickets. He is the 2nd leading wicket-taker of the tournament with 9 wickets to his name.

Devon Smith is one of the most experienced players available here. He is in good form, has 157 runs to his name, and also has managed to score them quickly. He has a strike rate close to 190, which will come in handy here.

Alexis is yet another player who can contribute from both fronts. He so far has 68 runs to his name and also has managed to pick up wickets at regular intervals. When these two teams met earlier, he ended up grabbing three wickets while opening the bowling for the team.

Regis has been consistent and is in good form at the moment. He will be opening the innings for the team and has managed to score quick runs for his team. He so far has 179 runs to his name while averaging close to 30 and also has a strike rate close to 160.

Sharkim Edwards is likely to play this game and if he does, he is a must-have pick from the BLB team. He recently smashed 34 runs with three sixes to his name.

Amikel Dubissette is the top pick among bowlers. We can trust him for a couple of wickets here. He so far has five wickets to his name and his best performance came against team CC where he had three wickets.

Who Will Win Today Between NW vs BLB Dream11 Prediction, Match 28?

According to Kheltalk’s astrology NW vs BLB Dream11 match Prediction, Team BLB is likely to start this match as favourites. They are in good form at the moment and will be looking for revenge against NW. The latter had won their last match-up.

According to Kheltalk’s NW vs BLB Dream11 toss prediction, NW is likely to bowl first here. Since most of the teams have won the toss and have opted to bowl first, we could expect NW to follow the same trend here. Also, due to conditions, most teams have preferred batting second here.