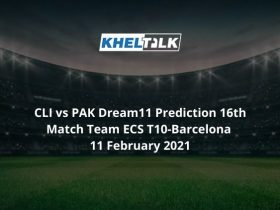 New Zealand XI and Pakistan A will step up to lock horns in the fifth and the last T20 game at the Bert Sutcliffe Oval in Lincoln. In the previous encounter, New Zealand XI suffered defeat against Pakistan as they fell short by 101 runs while chasing a mammoth total of 231 runs. Hopefully, Jeet Raval’s side will be looking forward to bouncing back strong on Tuesday. Pakistan, on the other hand, has got back to back victories after losing their first two games of the series. Now let’s see who would be more dominating in the finals. Let’s go through NZ-XI vs PK-A Dream11 Team Prediction for the upcoming encounter of Pakistan A tour of New Zealand T20.

This venue is a batting paradise where batsmen would smash bowlers in any direction. Pacers will witness some extra bounce as well. Spinners need to come up with multiple variations to chip wickets here.

Fergus Lellman and William O’Rourke might sit on the bench as Fraser Sheat and Henry Shipley are likely to take their spot. No other changes are expected. The top order must provide a good start to the side so that the middle order can avoid pressure and play naturally. Bowlers were a bit expensive in the last game and now they must improve their line and length to avoid unnecessary runs. This is the team information available from the New Zealand XI dugout for the upcoming affair. This is the team news available from New Zealand’s dugout.

Top-order batsmen gave the team a superb start with the likes of Shafique, Zeeshan, and Ali Haider in the previous game, Talat played a vital role in the middle order and added crucial 44 runs to make it easier for bowlers to defend the target. Later, bowlers performed their duties well and booked the Kiwis on just 130. No changes are expected from this combination. This is the team information available from Pakistan A dugout for the upcoming affair. This is the respective news available from Pakistan A dugout.

All-rounders: I Ahmed, A Butt

Zeeshan Malik has played brilliant cricket in all the formats for Pakistan A lately. He played an exceptional knock in the last game by scoring 54 runs off just 37 balls which included 10 boundaries. So far, he has two half-centuries in the series.

All-Rounder Jeet Raval, skipper of Kiwi has played decent cricket in the series so far. He has great spinning ability and can even trouble the batsmen with his variations. He didn’t do well in the last game but is expected to bounce back strong.

H Talat is another key player for Pakistan A. He has batted well in the last two games. Having an unbeaten half-century in the second last game and another 44 runs as a middle-order batsman, he can be effective again. He even chipped a wicket in the previous game. Don’t miss him out.

R Mariu is the only player who played impressively in the last game for Kiwis. He scored important 48 runs in the last match and provided a good start for the team.

NZ-XI vs PK-A Team11 Team Prediction: Who will win the match

New Zealand has the home advantage but looks like Pakistanis have read the Kiwi’s conditions perfectly and will not let Kiwi’s bounce back. As per our Dream11 Team Prediction experts, Pakistan A is the favorite to win this game.