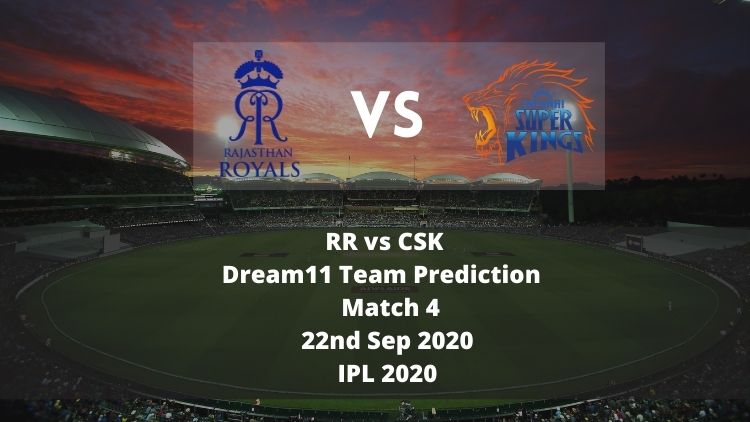 Up next to lock horns are Chennai Super Kings and Rajasthan Royals. After opening their tournaments with the victory, Chennai Super Kings would be eager to grab their second win, while it will be the first game for the Royals. These two teams have a terrific rivalry and are expected to come up with an exciting encounter. The match is scheduled to be played at Sharjah Cricket Ground, Sharjah on 22nd September 2020.

The surface at Sharjah is a little more batting-friendly and bowlers will have to come up with extra efforts to trouble batsmen, especially in death overs. No chances of rain. The team batting first should be looking to put a total of at least 150-170 runs on the board.

One of the most experienced players in the history of IPL. He has smashed 4411 runs in 177 games at an impressive striker rate of 130.70. Robin Uthappa was even honored with an Orange cap in the 2014 season with KKR for scoring 660 runs. He has played 21 matches against the Super Kings, scoring a decent 538 runs at an average of 31.65 with a strike-rate of 135.52. Now after playing with KKR for five years, he has to prove his trade to RR.

Although he failed against MI. But he has a tremendous record against the Royals. In four matches since 2018, the CSK opener has 158 runs against RR at an average and strike-rate of 39.50 and 150.48 respectively, along with a century.

He started his IPL journey with the Royals itself. In 21 encounters, he has bagged 26 wickets at an average of 23.69 and an economy rate of 7.53. He is the leading pace bowler for the team and cannot be taken lightly.

Although, Lungi Ngidi was expensive in the first over he throws against MI, but later he showed why he’s reliable for his team. He bagged three important wickets to hand MI their first defeat of the tournament. Playing 13 games, he has got 24 wickets at an economy of 8.

RR vs CSK Dream11 Prediction: Who will win the match:

After winning their opening game, CSK will be Jubliant. Rajasthan Royals will surely miss the likes of Stokes and Buttler, so this may affect them. Also, Steve Smith hasn’t played in a while because of concussion protocols. Considering these facts, Chennai Super Kings has an upper hand after winning the previous encounter. So Super Kings’ win should be the one coming out with smiling faces in the upcoming fixture.