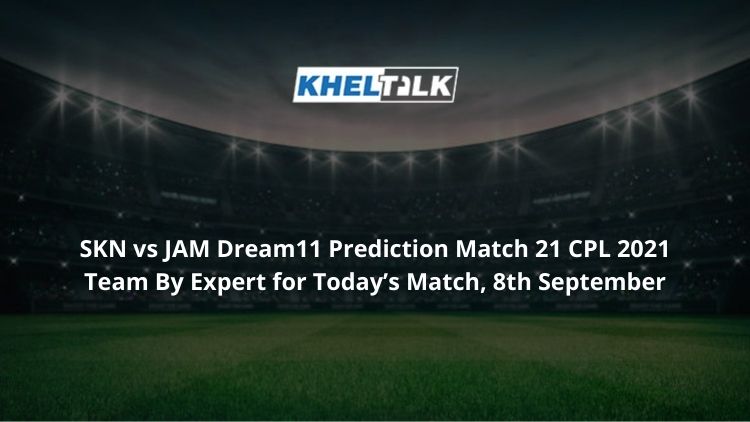 Jamaica Tallawahs will lock horns with St Kitts and Nevis Patriots once again. Both teams are having a contrasting tournament so far. Patriots have won five out of their seven outings and are at the top of the table with just two losses to their name.

Tallawahs, on the other hand, have won only two matches and are at the bottom half of the table. They are in need of this win today.

When these two teams met earlier in the tournament, the Patriots had a convincing win over them. Tallawahs made 166 runs in their last meet. Patriots chased down the same within 18 overs to take the match by six wickets. Rutherford and Allen were the top performers for the team in that contest.

The pitch has supported the bowlers right from the beginning but there is something for the batters in recent times. As the pitch got older, the batting looks a bit easier now and most of the teams were able to dominate in the middle overs.

In the last five matches

We are in for a cloudy day here. One can expect the temperature to be around 32 degrees Celcius for the most part of the day. There is almost zero per cent chance for the rain today.

Evin Lewis has had starts in almost all the matches in the tournament so far. He is in excellent form at the moment. Rutherford, on other hand, has scored a couple of fifties here and is certainly the one to watch out in this contest.

Jamaica Tallawahs will depend on their experienced duo of Russell and Brathwaite once again. Both players have had honorable performances here but they are yet to perform consistently in the tournament, something the team needs now.

Evin Lewis will hold the key once again in this contest. He is just too good to be missed out here. If he cannot make half-centuries, he is certainly capable of pulling off a quick cameo. Either way, he is an important pick here.

Fabian Allen is more of a utility pick available here. The all-rounder is likely to add 30 to 40 runs here and also is capable of picking wickets at regular intervals.

DJ Bravo is an important pick no matter what and where we play. The veteran all-rounder was the pick of the bowlers in the last head-to-head contest. He had three wickets while giving away just 25 runs.

Carlos Brathwaite has done well in the last few contests in the tournament. Recently, he also had a fifty to his name and is likely to dominate in this contest.

Imad Wasim could prove vital here. He recently played an excellent knock along with Brathwaite to take the team to a decent total against TKR. He is also useful with the ball here.

Who Will Win Today Between SKN vs JAM Dream11 Prediction, 21st match?

According to Kheltalk’s astrology SKN vs JAM Dream11 match Prediction, the Patriots will begin this contest as the favorites to win this contest. They are the best team in this tournament and also, they have dominated Tallawahs in their last head-to-head match. Once again, they will look to dominate here.

According to Kheltalk’s SKN vs JAM Dream11 toss prediction, the Tallawahs will win the toss and will bowl first here. Last time, when these two teams met, Tallawahs went down by batting first. Thus, they will look to change it here.