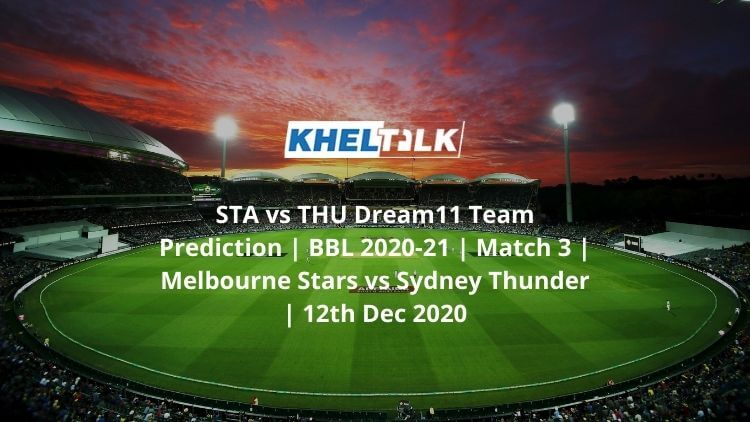 Melbourne Stars will now take on Sydney Thunders in 3rd fixture of KFC BBL10. Talking about Thunder, they will be looking forward make an impact from starting as they would not want to finish as they did in the last season. They could only manage to win 6 games out of 14 and were placed at the 5th spot on the points table. The match is scheduled to be played at Manuka Oval, Canberra. So, let’s go through our Dream11 Prediction for the upcoming Big Bash League game between STA vs THU.

The batsmen and bowlers will enjoy the surface. 160+ runs will be a decent total on Manuka Oval, Canberra. The pacers may get some swing especially in the first couple of overs. The weather condition will favor the seamers.

Batsmen: A Hales, U Khawaja, A Ross, C Ferguson

Glenn Maxwell needs no introduction. If he gets well on the crease then we are aware of the destruction he can make. He looks in tremendous form with the bat as well as the ball and had a good outing against India recently. He will be looking forward to carrying a similar momentum in the BBL this season.

Usman Khawaja is fit and will be playing the entire season. He was good at scoring runs in the last season as he contributed 388 runs for his side and is expected to have better stats this season as well.

Alex Hales scored second highest runs in the previous edition of BBL and will keep the momentum alive in this season as well. He smashed 576 runs at an average of 38. Don’t miss him out.

Adam Zampa can be an x-factor player in this tournament, he recently had an amazing series against India recently. He bagged 20 wickets in 16 games in the previous edition.

STA vs HEA Dream11 Prediction: Who will win the match

Thunders have few prominent names in the team and this makes them a tough opponent. It will not be easy for Stars to dominate them easily. But our Dream11 Team Prediction experts bet on Melbourne Stars to win the game as they have a better line up on papers.