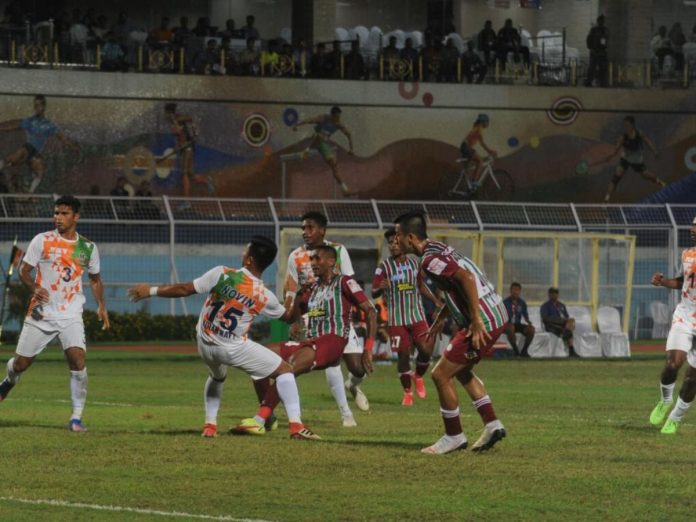 It was a positive day for the Indian Super League (ISL) teams as both Kerala Blasters and ATK Mohun Bagan registered clinical and dominating victories against their opponents.

Kerala Blasters sealed their quarter-final spot by defeating Army Green 2-0 in a comprehensive fashion. Muhammad Aimen and Aritra Das netted the goals for the Kerala side as they move on to the next phase of the 131st edition of the Durand Cup 2022.

The Kerala Blasters attackers and midfielders kept adding pressure on the defenders of Army Green and displayed a dominating performance at the Indira Gandhi Athletic Stadium in Guwahati.

Youngster Aritra Das’s goal was an absolute bullet of a goal and highlighted the entire momentum of Kerala Blasters in the game.

Coach Juan Fernando’s ATK Mohun Bagan kept their quarter-final hopes alive after the Mariners inflicted a 2-0 defeat against the Services team. Lenny Rodrigues and Kiyan Nassiri scored the goals for ATK Mohun Bagan and this was a much-needed victory for the Kolkata-based side.

ATK Mohun Bagan find themselves in a tricky situation as this win does not guarantee them a place in the last-8. If Rajasthan United win their last match against Indian Navy, then they would qualify ahead of ATK Mohun Bagan based on their better head-to-head record with the green and maroon brigade.

Jamshedpur FC cross swords with Indian Air Force today at the Salt Lake Stadium in Kolkata. In the other match of the day, TRAU FC will be locking horns with Chennaiyin FC at the Khuman Lampak Stadium in Manipur.