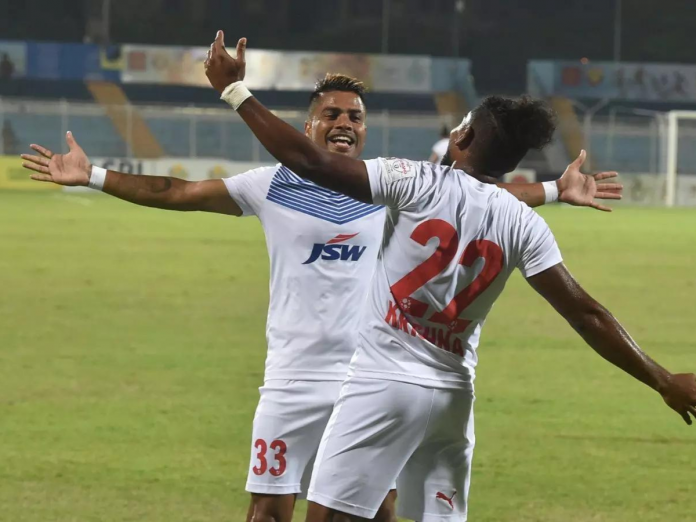 Bengaluru FC cruised into the semi-finals of the ongoing Durand Cup 2022 in what was an edge-of-a-seat quarter-final against Odisha FC.

The two Indian Super League (ISL) contestants were in red-hot form throughout the match and it was 1-1 till extra-time of the game. However, Fijian striker Roy Krishna took things into his own hands and struck a late goal in the dying minutes of the game to propel Bengaluru FC into the semis of the Durand Cup.

The entire crowd erupted in joy and applause as Sunil Chhetri’s side prevailed over Odisha FC. Sivasakhti Narayanan scored the other goal for Bengaluru FC.

Brazilian forward Diego Mauricio scored the equaliser for the Juggernauts and gave the match, the much-needed thrill and excitement. Mauricio looked in fantastic touch throughout the game and was quite dominant with the boot.

Saul Crespo and Diego Mauricio were the two strikers of Odisha FC and they kept pressing in the entire match.

However, it was Roy Krishna who stole the limelight with his goal at 120+1 minute and handed a heartbreak to the Odisha FC players and the fans. Odisha FC crash out of the Durand Cup tournament with this defeat.

The Blues will now be facing the winner of Hyderabad FC and Rajasthan United in their semi-final of the world’s second-oldest football tournament. Sunil Chhetri and Roy Krishna are expected to take on the onus in that game.

In today’s quarter final, Mumbai City FC will be playing against Chennaiyin FC at the Salt Lake Stadium in Kolkata.