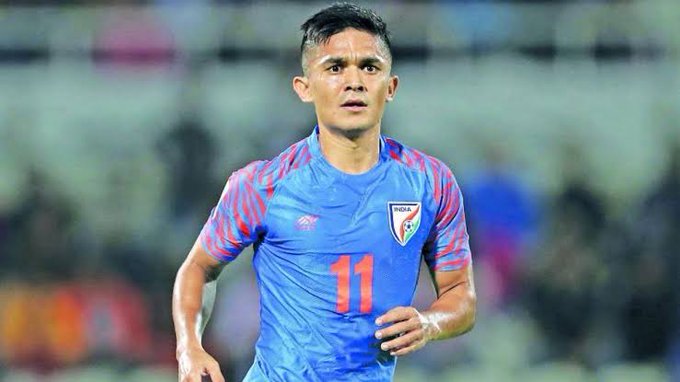 An undisputed monarch of Indian football, Sunil Chettri is an inspirational figure to everybody in the sports world. His supreme athleticism, exceptional leadership skills and fluent dribbling skills make him one of the best football players ever produced in India. Time and again, he has shattered several records and sits at the top of the list of the best Indian footballers. He ages like fine wine and his fitness puts even some youngsters’ fitness to shame. As he turns 38, we go down memory lane and look at a few of the maestro’s exceptional achievements and records:

Most international goals for India

Sunil Chhetri is a goal-machine. He has netted 84 goals to date for India in 129 appearances, which is the highest by any Indian player. Notably, he is just behind Portuguese striker Cristiano Ronaldo (117 goals in 189 matches) and Argentine striker Lionel Messi (86 goals from 162 matches) in the list of most international goals by active players.

Winning prestigious awards from the Government of India is no mean feat. The skipper of the Indian national football team has won several of them and has stamped his authority as a force to reckon with in the international circuit. Sunil Chhetri was awarded the Arjuna Award in 2011 for his exceptional services to football. He was also bestowed with the Padma Shri award in 2019, which is India’s 4th highest civilian award. Recently in 2021, Chhetri was awarded the highest sporting honor in India, the Rajiv Gandhi Khel Ratna award.

Most hat-tricks for Team India

Most AIFF player of the year awards

The All-India Football Federation (AIFF) has a prestigious AIFF player of the year award for the best Indian player of the year. Sunil Chhetri has bagged that award a record 5-times. He won the award in 2007, 2011, 2013, 2014 and 2017. This simply proves that Chhetri is a player of surpassing skill and power!