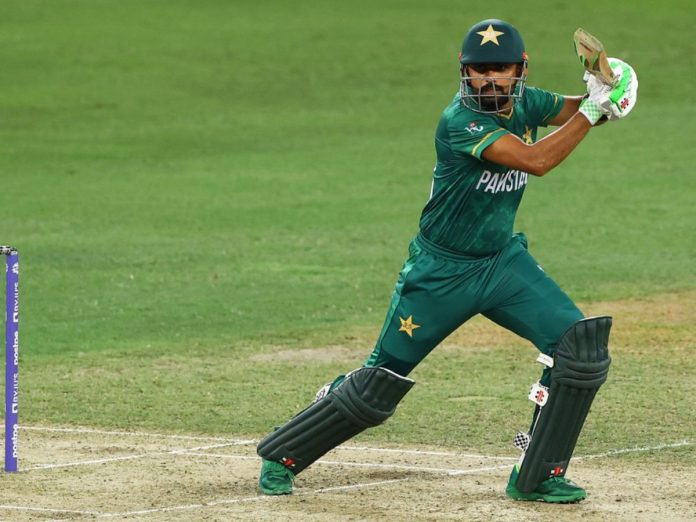 The 27-year-old is Pakistan’s captain in the forms across the three formats of international cricket. He is a force to be reckoned with, especially since the fine batsman became the first to hit three consecutive centuries on two separate occasions in ODIs.

The skipper Babar Azam is marked by their extravagant talents with the bat. The question is can this run-scoring master propel Pakistan to a World Cup victory. I know, where have we heard this one before, just about every player’s childhood ambition is to bring the world cup home.

But maybe just maybe, this 27-year-old has what it takes to make this dream a reality. Babar Azam is at the zenith of his form, across all three formats of international cricket. He was recently recognized as the first batsman to hit three consecutive centuries on two separate junctures in One Day Internationals.

But the top-order batsman told AFP that his prolific form won’t amount to much if it fails to succeed at securing the T20 World Cup in October in Australia and the ICC Men’s Cricket World Cup scheduled to be held in India next year.

“No doubt I am enjoying my form, But with this form, my prime goal is to win the two World Cups for Pakistan in the next one-and-a-half years and if that happens I will feel that my runs are worth gold.”

Azam knocked a match-winning ton against New Zealand at the 2019 ODI World Cup. Pakistan did not qualify for the semi-finals as they lost that fixture to the Aussie team which went on in due course to win the T20 World Cup semi-finals in the United Arab Emirates despite Azam’s blockbuster performance.

From the streets of Lahore to Wonder Boy

At an early age Azam learned to play cricket in open spaces and streets of Lahore. He recalls and shares his early childhood memories below.

“When I started playing cricket as a schoolboy the target was to play international cricket for Pakistan, become the world’s top batsman in such a manner that it helps my team to win all the titles,” he said.

Azam Siddique, the Wonder boy’s father, was his number one fan and supporter.

“I was crazy about cricket in my childhood and noticing that passion my father backed me,” recalled Azam.

His journey early on started as a ball boy during a Pakistan-South Africa Test in Lahore back in 2007, that was when Azam’s dream came true when he saw his beloved hero AB de Villiers up close.

“When I was a kid I used to follow AB de Villiers, I liked the way he used to play the ball on the up. It was delightful for me so I developed that and it helps me get even with the bowlers.”

Azam compares how the game has evolved compared to the hay days.

“Nowadays international cricket is so tough and players are so skilled that if you don’t prepare well, you can’t compete. The first and foremost thing is that you have to have belief in yourself and with that mindset I get into the middle and bat with positive and aggressive intent.I always want to dominate the opponents, and that pays off. When you score runs, not only the world acknowledges and fans are enraptured, it also motivates the whole team and they also aim to contribute.”

Azam took charge as the captain in all formats in 2019, but rather than weighing down on him, it motivated him to improve and lead by setting an example.

“As captain, I want to take the challenge because I am at the front. If I am in front, only then my team will follow me and that is the same with run-scoring.

If I am scoring runs then other batters will follow and get inspired, but there is always room for improvement so I want to improve my finishing and that is important as captain.”

“It’s a great feeling playing at your home grounds and before your own fans. That gives me a double dose of energy and I aspire more and more wins for Pakistan.”