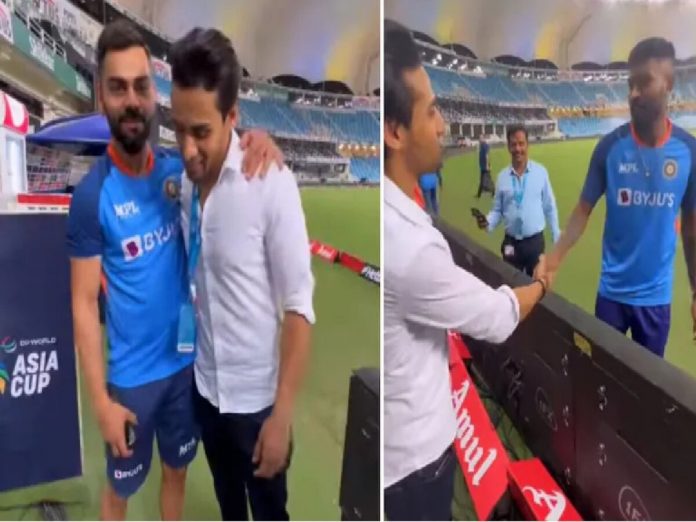 Fame from “Maaro mujhe maaro,” in a few videos, Pakistani fan Momin Saqib is seen chatting with Virat Kohli and Hardik Pandya after the game at the current Asia Cup in Dubai.

He was available for the August 28, Asia Cup 2022 opener between India and Pakistan in Dubai. Even though he was upset that the team he was rooting for, Pakistan, lost, he made a point of seeing the top players from both teams after the game.

After the thrilling game, Momin greeted the winners, Virat Kohli and Hardik Pandya, in person. Momin was optimistic that India and Pakistan would face off in the Asia Cup finals in 2022 despite Pakistan’s initial defeat.

After the game, Momin met Pandya and Kohli, and he posted videos of their encounter on Instagram.

A great sportsman and a humble personality. The one and only @imVkohli 🙌🏻 Good to see him back in form!

What a game tonight! 🔥

“Good neck-to-neck game. Despite being young and with raw talent, our bowlers did an amazing job. But you batted well to take the match away from us. Bhai tera chakka nahi bhulay ga!” he wrote sharing the video with Pandya.

Good neck-to-neck game. Despite being young & with raw talent, our bowlers did an amazing job👏🏼 But you batted well to take the match away from us 🏏@hardikpandya7 Bhai tera chakka nahi bhulay ga! #AsiaCup2022 #MominSaqib #HardikPandya #INDvsPAK2022 #PAKvIND #INDvPAK #Dubai pic.twitter.com/Np8iSmslfW

In their season debut against Pakistan, the Indian team put on a thrilling performance. India was able to win thanks to Ravindra Jadeja’s outstanding performance and Hardik Pandya’s all-around heroics. In India’s exciting victory over Pakistan, Pandya scored an unbeaten 33 off just 17 balls and claimed 3 wickets, while Virat Kohli scored 35 runs off just 34 deliveries. India’s victory over Pakistan by five wickets was a source of pure happiness and national pride for the entire country.