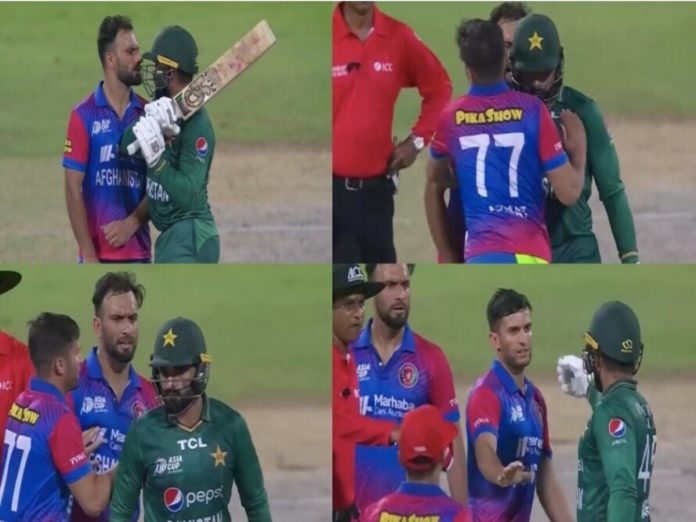 On Wednesday, Pakistan batsman Asif Ali got into a heated argument with Afghanistan’s Fareed Ahmad during their Asia Cup 2022 Super Four match in Sharjah.

The incident occurred during the 19th over of the match when Pakistan was on the verge of winning by 12 runs off just eight balls. Ali had previously hit the left-arm pacer for a six over mid-on in the previous delivery and was eager to build on the energy generated from the maximum.

However, Fareed upset the Pakistani right-hander in the fifth ball of the over with a slow short ball that caught the top edge of Asif’s erratically swinging bat and fell to Karim Janat for a secure catch. The fielder rushed backward to ensure the challenging catch while positioned at short fine-leg.

At that point, the pacer Ahmad was so overcome with enthusiasm that he exulted a little too loudly in front of the leaving batter. Asif gave the gesture a shove in return before turning away from the Afghan to enter the pavilion. Next, Ahmad was spotted moving in the direction of Asif while speaking animatedly. Ali didn’t like what he had heard at all, and he turned to nearly smack the Afghan pacer with his bat before regaining his composure.

In a now-viral video, Ali is shown acting aggressively toward the Afghan player before violently raising his bat in the air and threatening to strike the pacer.

Azmatullah Umarzai and Hasan Ali, two players from Pakistan and Afghanistan, intervened shortly after to put an end to the argument.

Asif was making his way into the pavilion when Afghan player Fazalhaq Farooqi made a joke at him as well.

Aakash Chopra, a Hindi commentator for the official broadcaster, could be heard saying that Ali had gotten himself into difficulty because of his combative gestures and might have to sit out a game at this point.

The tailender Naseem Shah’s back-to-back sixes on the first two balls of the 20th over were what sealed their victory. Fazalhaq Farooqi, a left-arm pacer, was on the receiving end of Shah’s two full tosses, which helped Pakistan reach 131/9 while chasing 130.

In the meantime, Pakistan defeated Afghanistan by one wicket on Wednesday in their final Super 4 game of the Asia Cup. India and Afghanistan, who have lost their last two games, are no longer eligible for the Sunday final as a result of the outcome. Pakistan and Sri Lanka both earned four points to advance to the final match.