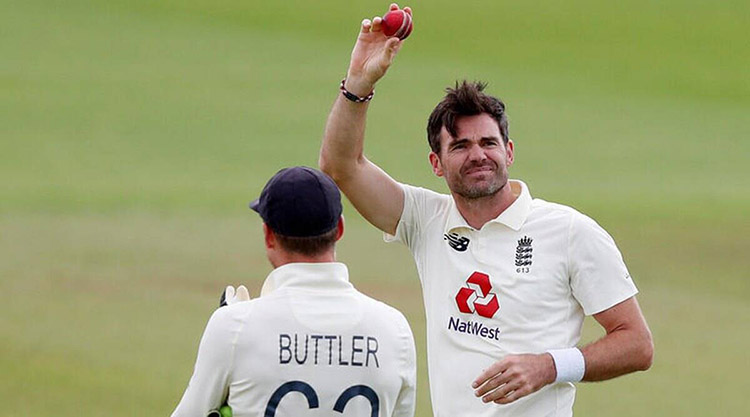 Who is the first Pacer to take 600 Wicket in Test Cricket?

Anderson, the swing king would be happy to add another record to his name. He joins the likes of Muttiah Muralitharan, Shane Warne, Anil Kumble in the legendary 600 wicket club. On the final day of a test match against Pakistan, Azhar became Anderson’s 600th victim as he was caught in the slip by Joe Root.

Anderson, now 38, looked like the best version of himself in this match as he claimed his 29th five-wicket haul in test cricket. This was his 156th test match for England. Pakistan was bowled out for 273 runs and had to follow-on by the end of the third day. England was already winning the series by 1-0 previous to this match.

When the play resumed on the 4th day, Anderson was keen to make history by collecting his 600th test wicket. However, his celebrations were delayed a little as Jos Buttler spilled a catch behind the wickets.

Still, at 598th wicket, Anderson dismissed Abid Ali by catching his leg before the wicket to move closer to a new record. However, he had to wait until the last day of the game to finally become the first fast bowler to collect 600 test wickets.

James Anderson beat the likes of Glenn McGrath and Courtney Walsh to become only the 4th bowler to enter the 600-Club. He is only behind Anil Kumble (619). Shane Warne (708) and Muttiah Muralitharan (800), the three legendary spinners of the game.

Fellow countrymen Stuart Broad who has played a second fiddle to Anderson many times in his career currently sits at 514 wickets. The English duo of Anderson and Broad is feared globally with the new ball. Earlier this year, Anderson congratulated Broad for making it to the 500 wicket club.

James made his test debut against Zimbabwe on 22 May 2003. He was the chosen youngster in a star-studded English team led by Andrew Strauss. Anderson has had a memorable test career so far. He was key to the success of the English team that won 2010-11 Ashes in Australia and grabbed the number one spot.

Playing his 100th test match for England, Anderson surpassed Ian Botham (382) to become the English player with the most number of Test wickets. He became the fast bowler with the most number of Test wickets when he dismissed Mohammad Shami in 2018 to surpass McGrath’s record of 563 wickets. It would be amazing if the countryman and his long-time bowling partner Broad can break into the 600 Club as well.