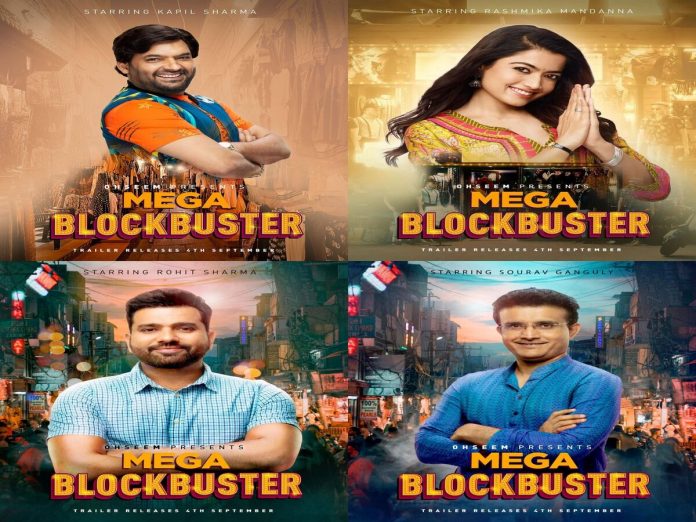 The Indian cricket team’s white-ball skipper, Rohit Sharma, recently unveiled a poster that initially looks like it belongs to a movie or television show. Soon, more famous people including Rashmika Mandanna, BCCI President Sourav Ganguly, and Tamil actor Karthi started uploading pictures of themselves in similar situations. Every post suggests that a trailer of sorts would be released on September 4.

The posters for “Mega Blockbuster,” which stars actors Kapil Sharma, Karthi, Trisha Krishnan, and Rashmika Mandanna, have been shared along with our Indian captain Rohit Sharma, BCCI President Sourav Ganguly, and others, leaving fans confused about the plot of the film.

Fans were puzzled as to what the premise of “Mega Blockbuster” was after seeing similar posters released by “Ohseem,” actor and comedian Kapil Sharma, Rashmika Mandanna, Trisha Krishnan, and superstar Karthi.

“Butterflies in my stomach. A debut of a kind #TrailerOut4thSept #MegaBlockbuster,” wrote Rohit Sharma in his Instagram post, which elicited a strong response from the explosive batter’s supporters. Sharma is depicted in the cricketer’s posture holding his hands in front of him while donning a light blue checked shirt and posing for the camera.

On the other hand, the iconic left-handed batter is featured on BCCI President and former Indian captain Sourav Ganguly’s poster wearing a blue kurta and standing with his hands folded. “It was fun shooting for it! The new Mega Blockbuster is releasing soon!” noted Ganguly in the caption.

Following these poster series, several fans took to social media to speculate if ‘Mega Blockbuster’ is an upcoming movie or some promotional campaign.

Some fans noted that the celebrities are posing in colourful clothing against the backdrop of pictures from a store, shopping market and bazaars, indicating that it could be a campaign for an apparel wear e-commerce brand.

Given that the festive season is underway and with Navratri, Durga Puja, Dussehra, and Diwali coming up in the next couple of months, having these celebrities promote an apparel brand or e-commerce app seems apt.