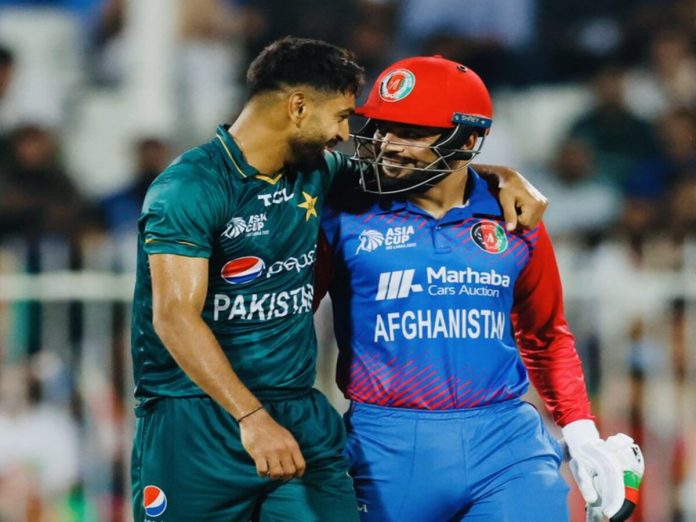 Ramiz Raja, the chairman of the Pakistan Cricket Board (PCB), announced on Thursday that the board would write to the ICC to “lodge a protest” regarding the unrest caused by the fans after the Afghanistan-Pakistan match at the ongoing Asia Cup 2022 at Sharjah Cricket Stadium.

Asif Ali and fast bowler Fareed Ahmad Malik got into a significant war of wards on Wednesday night while Pakistan was attempting to score runs. Following the dismissal, Asif was observed charging Malik and aiming his bat in his direction.

Before Azmatullah Umarzai of Afghanistan, Hasan Ali of Pakistan, and the umpires intervened to diffuse the situation, the two players engaged in a violent argument. After the game resumed, Pakistan defeated Afghanistan by one wicket to secure their spot in the championship game.

Trouble in the stands broke out after this. The Sharjah police detained a number of Afghanistan supporters after the incident. However, according to a source from ESPNcricinfo, no arrests were made.

You can’t link hooliganism with cricket

Fans were seen taking out bucket chairs and throwing them at one another in the video that was recorded in the stands. Seat cushions were also torn up. By the time the police and the ground authority took action, significant damage had already been done. In order to stop more damage, the organisers promptly ordered the spectators out of the stadium.

“You can’t link hooliganism with cricket and this environment makes you sick. We will write to ICC, raise concerns, and do whatever we can because the visuals were gruesome,” Ramiz Raja said in a press conference.

“This didn’t happen for the first time. Wins and losses are a part of the game. It was a gruelling contest, but emotions should have been kept in control. Until the environment is right, you can’t grow and go forward as a cricket-playing nation.

So we are going to express our anguish and frustration to the ICC. We owe it to our fans, anything could have happened… Our team could have been in danger… So whatever the protocol is we will follow that and lodge our protest,” he added.

Hope others will also respect the passion

Meanwhile, the Afghanistan Cricket Board put out two tweets, calling for people to “work together” to bring the cricket fraternity closer and spread love.

“AfghaAtalan have always represented the Afghan Values at its very best and have truly treated cricket as a gentleman’s game. We hope others will also respect the passion and dedication for the game and somehow try to spread love and devotion among nations. AfghanAtalan, Our Pride,” the ACB said in a tweet.

AfghaAtalan have always represented the Afghan Values at its very best and have truly treated cricket as a gentleman's game. We hope others will also respect the passion and dedication for the game and somehow try to spread love and devotion among nations

“Cricket is regarded as a phenomenon of harmony and more intimate relations between nations. Let’s work together to bring the cricket fraternity closer. Cricket does not allow for us to show negative emotions on the field and turn the friendship atmosphere into violence,” the other tweet read.