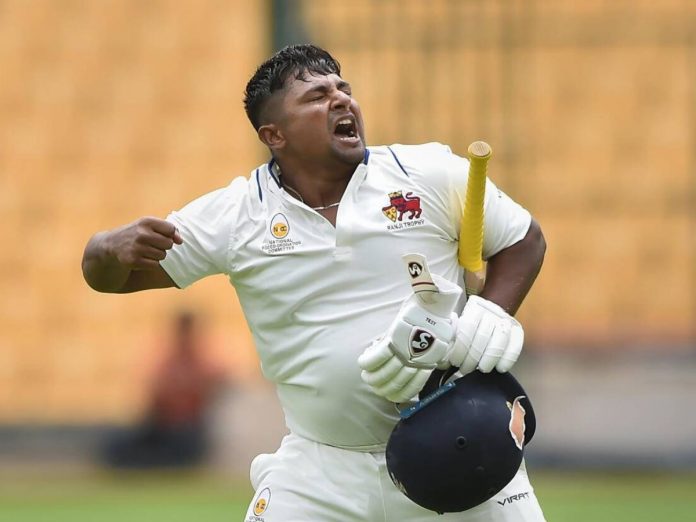 This Ranji season, Mumbai’s Sarfaraz Khan was on fire as he hit another daddy hundred this time against Madhya Pradesh. The 24-year-old surpassed the 900-run mark in 6 games and has four tons and three half-centuries to his name.

Carrying on with his run-making streak to Day 2 of the Ranji final, the youngster secured another mammoth ton in 190 balls at the M Chinnaswamy Stadium in Bengaluru.

After reaching this landmark, a very animated and tearful Sarfaraz flawlessly executed Moosewala’s signature step by slapping his right-hand palm on the thigh and pointing his finger upwards.

BCCI posted the video of visibly emotional Sarfaraz paying tribute to late Punjabi Singer Sidhu Moosewala with the caption “This has been a superb knock in the all-important summit clash.”

Sidhu Moosewala, a well-known Punjabi rapper who died in a shootout in Mansa this year, was known to perform this signature step in the videos of his songs and live events. In honour of the singer, many stars replicate the step as a tribute to the late singer.

Check out the video here

Khan came in to bat when Mumbai was in a decent position at 147/3. However, MP bowlers dominated the field, run picking was slow at best. fall of the wickets continued, but Sarfaraz was at 93 nearing his century, he brings out his T20 mode. Unable to find a solution for Mr. Golden, by the lunch hour Mumbai had comfortably reached 351/8.

On Day 2 of the Ranji Trophy Final, Sarfaraz entered a purple patch scoring a  119*, which coincidently marked his second 900+ run bounty in a Ranji Trophy after putting together 928 runs in the 2019/20 season. He was was third in line after Ajay Sharma and Wasim Jaffer to achieve this remarkable feat.

Leading Mumbai to 351/8 before lunch. Soon he was dismissed for 134 by Gaurav Yadav, with Mumbai bowled out for 374 in their first essay. Madhya Pradesh is now trailing by 251 runs after scoring 123/1 by the end of Day2.

‘I Would Have Completed my Hundred’: Rishabh Pant was Angry at Pujara at SCG for missing out on a historic ton