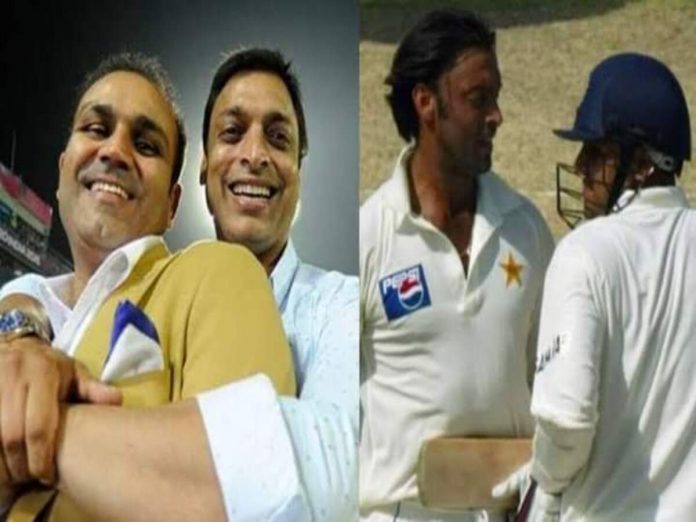 Cricket matches between India and Pakistan are not just typical regular matches. Following the games, there is typically a lot of banter between cricket fans and ex-players. During a pre-game interview with an Indian journalist on Sunday, prior to the start of the highly anticipated Asia Cup 2022 match between India and Pakistan at the Dubai International Stadium, former Pakistani cricketer Shoaib Akhtar became enraged.

As we know Virender Sehwag reportedly said to Shoaib Akhtar, “Baap baap hota he, aur beta, beta.” However, when an Indian reporter brought up the story to the Rawalpindi Express, he flatly rejected it.

After India defeated Pakistan by 5 wickets in their Asia Cup opening, the phrase “Baap, baap hota hai” started trending on Twitter. The hashtag was used by many fans to comment on the subject, and the conversation even reached the media rooms. However, Akhtar claimed that such a dialogue was never had in a conversation with a journalist.

Here’s the video of the same:

Shoaib Akhtar is on fire 🔥🔥🔥 pic.twitter.com/A1XtrmveZN

Would he survive after saying something like that to me?

Akhtar has previously denied Sehwag’s claim that he ever said anything. The seasoned player gave a similar response two years prior in an interview with Pakistani news organization ARY News, adding, “Would he survive after saying something like that to me? Would I leave him? I would beat him up at the ground and then at the hotel. The story has been made up.”