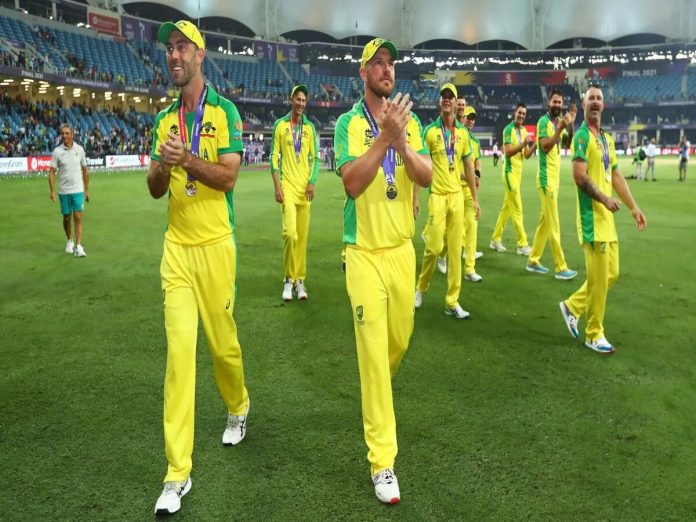 Australia has announced its 15-member squad to defend its ICC Men’s T20 World Cup title. The tournament will be contested in Australia later this year.

The Kangaroos, who defeated New Zealand in the tournament’s final in 2021 in Dubai, will be seen defending their championship.

Aaron Finch will again serve as the captain of the Australian team this season. The greatest news involving the group is that Tim David has officially switched. He switched from Associate Member Singapore after being chosen by the Australian selectors.

There is only one change from Australia’s dominant 2021 T20 World Cup squad. As per the latest update, the hard-hitting all-rounder, Tim David replaces spinner Mitch Swepson. The alteration in the AUS T20 WC squad might give Aaron Finch more batting options.

Chairman of selectors George Bailey said in a statement.

“This is a similar squad to that which became the first Australian’ men’s team to win a T20 World Cup. They are now very excited about playing the tournament at home.”

“Mitchell Swepson was unlucky to miss out based on conditions in the UAE at the last World Cup where we planned for tired, spinning wickets compared to what we would expect are good batting conditions along with the larger grounds in Australia.”

“Tim (David) continues to establish himself with some quality performances in leagues around the world, earning a place in the squad. He is a highly gifted, natural ball striker who will add extra batting depth to the group which has had a lot of success in T20 cricket in recent times. We expect him to play a similar role to that he has been playing in the past few years,” Bailey further added.

This year’s qualifiers will start on October 16 and 8 teams, split into two groups. They will be vying for the last two T20 slots in the league stage. On October 23, the league stage will begin, and on November 13, the championship game is scheduled to take place.