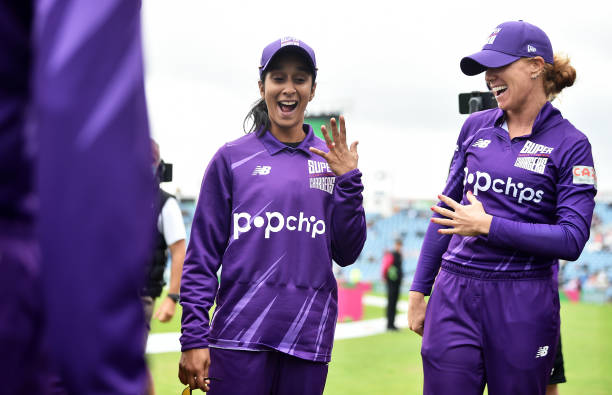 Following the historic introduction of Women’s Twenty20 Cricket at the 2022 Commonwealth Games in Birmingham. Female cricketers from around the world will compete for their various franchises in the ECB’s 100-ball event, ‘The Hundred.’

Tonight at the Oval, the Northern Superchargers take on the Oval Invincibles in the inaugural match of The Hundred Women’s Competition 2022. In the previous season of The Hundred, the Superchargers finished in sixth place on the points table, but the Invincibles ultimately won the championship by beating the Southern Brave by 48 runs in the final.

Last time, there were five Indian women cricketers playing in The Hundred. This time, only three Indian players will be playing for their respective franchises. Smriti Mandhana, Jemimah Rodrigues, and Deepti Sharma, three of the brightest performers on India’s silver-medal squad, are all back to perform in the second edition of The Hundred.

For the second straight season of The Hundred, the Southpaw star opener will again represent the Southern Brave. Mandhana will go out on the field full of confidence after her performance in the Commonwealth Games, where she scored a couple of half-centuries and ended up with the third-most runs in the tournament.

Jemimah Rodrigues would also return for a second year with the Northern Superchargers. Last year, Jemimah’s play was a major talking point, as she finished as the tournament’s second-leading run scorer and the team’s leading run-scorer. She, too, has been hitting the ball reasonably well, with a few noteworthy outings during the Commonwealth Games.

Last season, Deepti played for the London Spirit. This season, he has been picked up by the Birmingham Phoenix. In June of this year, the Indian all-rounder was one of 16 international stars who were picked up by one of The Hundred teams for the second season.

Smriti Mandhana and Jemimah Rodrigues, two of India’s biggest cricketing stars, were among the overseas players retained by their respective franchises for the second season of women’s Hundred.

Mandhana scored 167 runs in seven innings with a strike rate of 133.60. In her final game of the season, against Welsh Fire, she scored 78 off 52 balls, which was her best performance of the year.

When it comes to Rodrigues, she started the previous edition with a blazing 92 off of 43 balls, and then she backed that up with two more half-centuries, scoring 60 off of 41 balls and 57 off of 44 balls to score nearly 250 runs in five innings at an average of 60.25 and a strike rate of 154.48