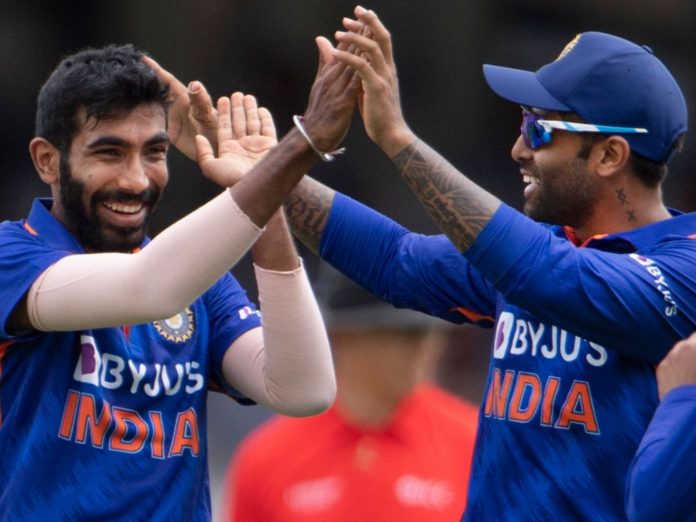 India’s dominance in the limited-overs leg against Jos Buttler-led England has resulted in some remarkable changes to the ICC rankings, with Indian players rising in almost every category.

Jasprit Bumrah has recovered to reclaim the top spot in the ICC Men’s ODI Player Rankings, after taking 6 wickets for 19 runs to help India defeat England by 10 wickets in the first ODI at The Kennington Oval on Tuesday.

No bowler above him 🔝

Jasprit Bumrah stands as the No.1 ODI bowler in the latest @MRFWorldwide rankings!

Bumrah lost the No. 1 position to New Zealand’s, Trent Boult in February 2020 after holding the position for most of the prior two years. He was at the top for a total of 730 days, more than any other Indian, and the ninth-most in history.

In the opening ODI, Rohit Sharma chose to bowl with the conditions being overcast, and Bumrah was precisely on line and length as he struck down Jason Roy and Joe Root.

The Right-arm pacer sent England’s in-form Jonny Bairstow and Liam Livingstone back to the pavilion, ending the day with a six-wicket haul in 7.2 overs while giving up only 19 runs and bowling 3 maidens. England was dismissed for just 110 runs in 25.2 overs.

Bumrah, who has previously been the No. 1 T20I bowler and is currently ranked third in Tests, is the only Indian fast bowler after Kapil Dev to have ever been ranked No. 1 in ODIs. Maninder Singh, Anil Kumble, and Ravindra Jadeja are the other Indian bowlers who have achieved top ranking.

A huge climb for Suryakumar Yadav in T20I cricket, as Dimuth Karunaratne reaches a career-high ranking on the Test scene!

More on the latest @MRFWorldwide rankings 📈

Suryakumar Yadav makes a place in the Top 5 T20I Batters

Suryakumar Yadav’s 117 runs in India’s final T20I against England has also helped him surge 44 places to a career-high fifth position in the T20I Player Rankings.

Despite only making his India debut last year, Yadav is compiling an impressive resume, as indicated by his latest ranking jump.

In total, SKY has four T20I half-centuries in the last 16 months, including his brilliant 117 from just 55 balls which led to his quick surge to the fifth spot.

Rohit Sharma closes in on Virat Kohli at No. 3

Rohit Sharma’s quick-fire 76 not out helped India achieve a breezy chase in just 18.4 overs. His recent knock also bridged the gap between him and Virat Kolhi in the ICC Men’s ODI Player Rankings.

The Indian skipper now stands at the 4th position (802 points) with just a point shy of Virat Kohli sitting at the 3rd place (803 points). Meanwhile, Shikhar Dhawan has moved up one spot to 12th position after his unbeaten 31 against England.