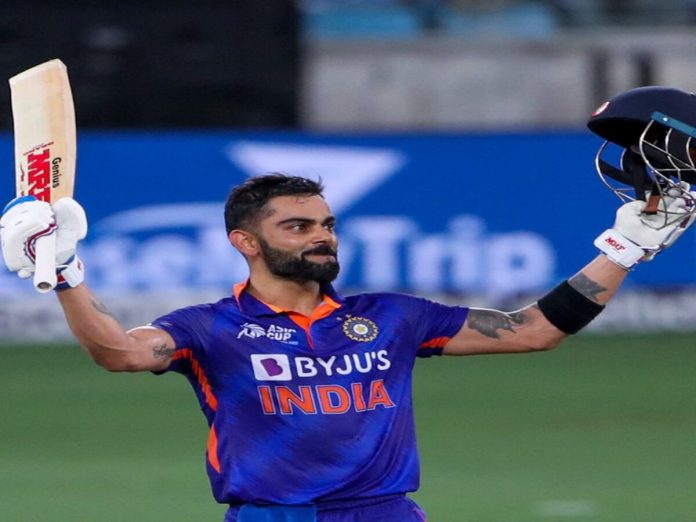 After 1021 days, the greatest batsman of our time, Virat Kohli, has finally scored a century in an international match. With his 71st international century, he has tied for the second-most century in the game’s history.

On September 8, in the fifth game of the Asia Cup 2022 Super 4 round at the Dubai International Cricket Stadium against the Mohammad Nabi-led Afghanistan National Cricket Team, Virat Kohli, who had been through a protracted dry spell, finally regained his mojo.

The milestone of 71 hundred was reached by Kohli in 522 innings, making him the fastest player in-game history to do so. In 523 and 652 innings, respectively, legendary players Sachin Tendulkar and Ricky Ponting both hammered their 71st international century. The fans, though, continued to celebrate Kohli’s noteworthy three-figure knock, which also happened to be his first T20I century.

The moment Virat Kohli silenced his critics and smashed his 71st century and also his maiden T20i hundred. pic.twitter.com/OkzRAWDzqr

You can see the happiness on his face. Very well deserved. King Kohli🙌🙌🙌🙌🔥🔥🔥#ViratKohli𓃵 pic.twitter.com/qtjZCaNqqQ

Kohli’s most recent international century came in November of 2019. The most recent century by Kohli came in a test match against Bangladesh in November 2019 at Eden Gardens and an ODI against West Indies in August 2019 at Queen’s Park Oval. Exact two years, nine months, and sixteen days later, Virat Kohli scored his first international century. It was Kohli’s first century in a T20I.

After Suresh Raina, Rohit Sharma, and KL Rahul, Virat Kohli is now the fourth member of the India National Cricket Team to score a century in each of the game’s three formats.

Also Read: “Those Angry Celebrations Are A Thing Of Past,” Says Kohli; De Villiers, Pathan, Other Praises Virat