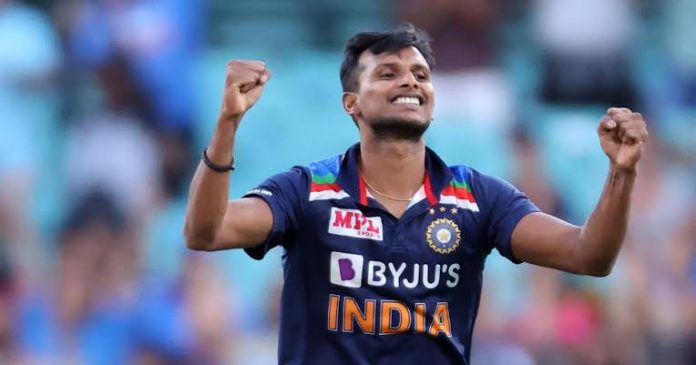 The BCCI has named the Indian team for the Asia Cup 2022. There were some interesting selections made by the selection committee. Some big names were also left out. Left-handed fast bowler T Natarajan was one of them.

Last year, Natarajan got a lot of attention because he did so well for the Sunrisers Hyderabad team. T Natarajan, a left-arm bowler for India, was sidelined for a long period due to injuries and Covid.

Both elite fast bowlers, Jasprit Bumrah and Harshal Patel, were injured and unavailable for selection. Fans can’t believe that T Natarajan, who is known as “the Yorker King,” won’t be able to make the Indian T20 team. Natarajan is thought to be one of the best bowlers to use in the last few overs of a game.

Also Read: Why did Team India pick Ravi Ashwin ahead of Kuldeep Yadav, and Yuzi Chahal in Asia Cup 2022

He also had a great IPL 2022 season while playing for Sunrisers Hyderabad. He took 18 wickets in 11 games, despite getting hurt and missing a few games. Check details on what are the reasons, why T. Natarajan hasn’t been part of Team India for so long.

Natrajan and the injury

Natarajan has spent more time on the sidelines than on the field since his dream tour to Australia. During the first leg of the IPL, he had trouble with his knee, which cut his time short. When he was ready to play again for the UAE leg, he tested positive for Covid-19. Natarajan went to the NCA in Bengaluru for about five months of rehab. He then trained in Chennai and in his hometown, Chinnappampatti, which is near Salem.

Not the same bowler after injury

Since coming back from an injury, T Natarajan has not been the same bowler in IPL 2022. Natarajan returned to the playing XI for Hyderabad’s game against the Kolkata Knight Riders (KKR) on May 14. He had missed a few games because of an injury. In the last game between SRH and MI, he was completely out of sync and gave up 60 runs in just four overs.

The current young Indian bowling line-up, which includes the likes of Avesh Khan and Arshdeep Singh, alongside the more experienced Bhuvneshwar Kumar is looking good. They have shown that they can do well under stress. Arshdeep Singh, who is 23 years old, played his first game for India last month. He has played in 6 T20Is so far and has taken nine wickets. The fast bowlers for India are swinging well and getting wickets.