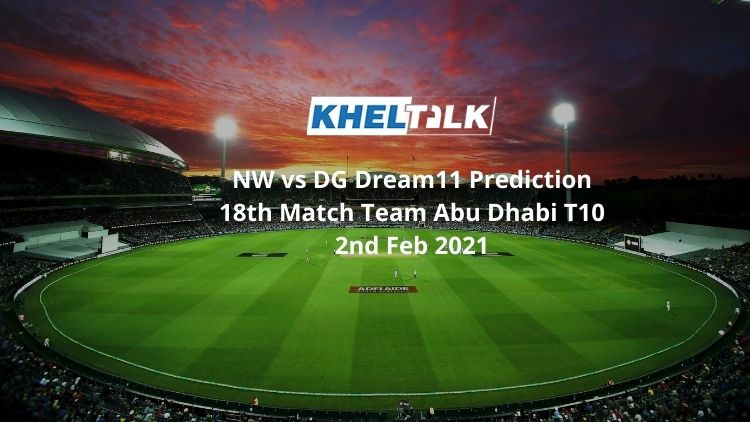 Here are the stats for the teams NW vs DG

The pitch at Sheikh Zayad Stadium is flat which will eventually help the batsmen to score runs. Spinners will have an opportunity to chip wickets later in the match.

We suggest you pick spinners with more pacers as the pitch has nothing good for pacers.

Northern Warriors leads the points table with two wins and a loss. They would want to keep their winning streak alive.

No changes are expected after a comprehensive win in their previous game Tigers.

Gladiators must find their winning combination soon else soon they will been stepping on the exit door. With just 1 win, they sit at the second last spot at the Group B points table.

Deccan Gladiators will step up with the same combination which they played against Team Abu Dhabi in January.

N Pooran came from another planet in the previous game. He smashed 89 runs off 26 balls to be the talk of the town. So far, he has scored 162 runs from 3 innings.

C Delport has scored maximum runs for the Gladiators so far. In three-inning, he has 84 runs at a strike rate of 161.52.

Zahoor Khan looks good with the ball. In three games, he has bagged five wickets at an economy of 9.66.

W Parnell has three wickets from three games for Warriors and has the lowest economy rate in his team.

We all know what Simmons is capable of and he stood up to his fan’s expectations.

He is capable of earning you fantasy points with both bat and ball.

We all know how unexpected this player is. He can even do dangerous hitting with the ball and can chip wickets when you need them the most.

Here is the Dream 11 Team prediction for NW vs DG. We are going with players who are currently in good form and can win the match with ease.

Head To Head Team For Northern Warriors vs Deccan Gladiators

Who Will Win Today Between NW vs DG Dream11 Prediction, Match 18th?

According to Kheltalk’s astrology NW vs DG Dream11 match Prediction, Northern Warriors will win the match.

According to Kheltalk’s NW vs DG Dream11 toss prediction, NW will win the toss and will opt to bowl first.