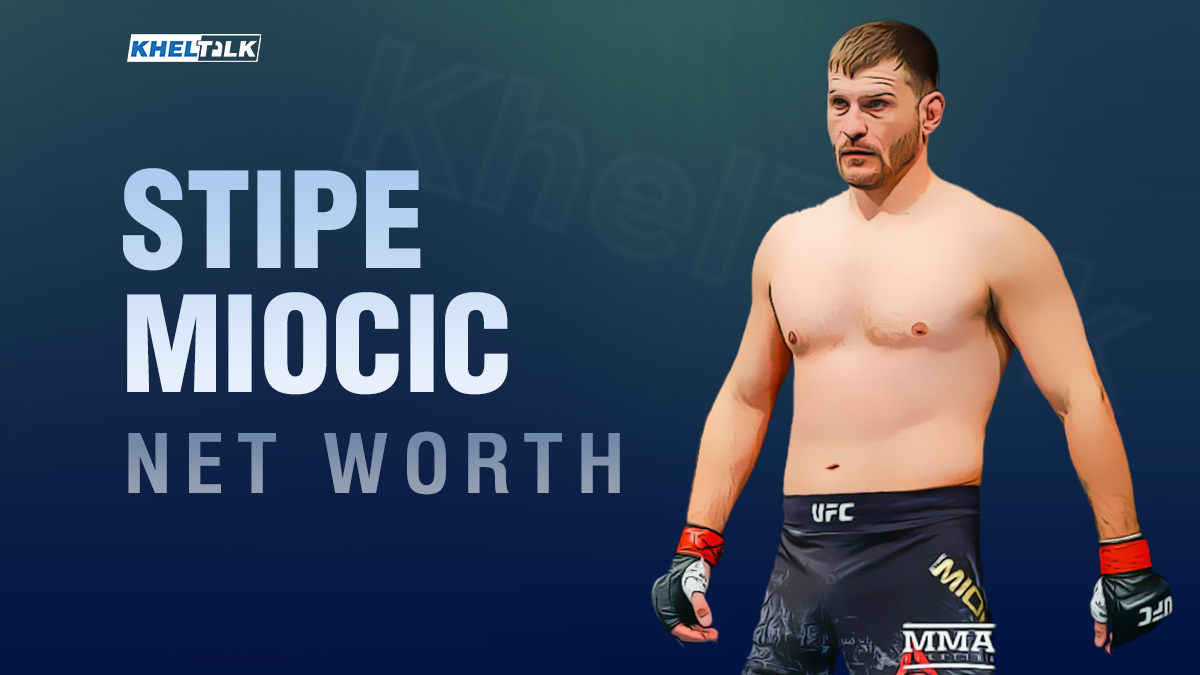 What is the net worth of Stipe Miocic?

Stipe Miocic is an active professional mixed martial artist. He currently competes in the Heavyweight division of the Ultimate Fighting Championship (UFC). Born on August 19, 1982, the American is ranked #2 in the UFC heavyweight rankings.

Gaethje’s first professional Mixed Martial art bout was against Corey Mullis which he won in February 2010. In the UFC he has managed to win the UFC Heavyweight Championship two times. The 39-year old has also wrestled in the NCAA Division 1 Wrestling.

In this article, we will have a look at Stipe Miocic’s Salary, Net Worth, Personal Information, Career details, Wife, Controversies, FAQs, etc

Net Worth: Stipe Miocic’s net worth is reported to be around $5 million. He has earned his net worth through endorsements, fighting in the UFC, and his firefighting job.

The UFC Star has reportedly earned more than $8m in earnings from his mixed martial arts fights throughout his career.

Stipe Miocic’s highest career earnings came in the UFC against Miocic vs Cormier in 2020. He earned around $1,200,000 for that fight.

House: The UFC fighter reportedly lives in Ohio. Stipe Miocic has an 8,400 sq ft home that has 5 bedrooms. He reportedly has a wooden theme that runs throughout his home. He also has a huge lawn in front of his home.

Stipe Miocic reportedly paid around $3.5 million to get his dream home in Ohio.

Debut: Miocic made his debut against Corey Mullis at the NAAFS: Caged Fury 9 event on 20th February 2010. He beat his opponent by TKO in the first round to start his MMA career.

First Championship (NAAFS): On June 4, 2010, Stipe Miocic beat Bobby Brents to win the NAAFS Heavyweight Championship. This was the first title in his MMA career. It took his record to 6-0.

UFC debut: Stipe Miocic joined UFC and made his debut against Joey Beltran in October 2011. He won the match by unanimous decision after 3 rounds.

Their second match took place on 17th August 2019, Stipe Miocic beat his opponent by TKO to win back his UFC Heavyweight Championship.

The final match of the Trilogy would take place on 15th August 2020. Miocic would win again, this time by the Judge’s unanimous decision to retain his title and win the trilogy.

Stipe Miocic’s Accomplishments (as of January 22′)

The UFC fighter has won the following accolades in his career:

He has also won other accolades in his professional career.

Ryan Marie Carney: She has been the UFC star’s long-time girlfriend. As per reports she has medical training from Cuyahoga community college in Cleveland, Ohio. Ryan Marie Carney serves as a nurse but it is not known if she is still working. She has also taken training to be a hairstylist and a cosmetology instructor.

The couple got married in 2016 after courting each other for years. They are very much in love and have a daughter named Meelah and a son named Mateo.

Miocic vs Cormier I: The first of the trilogy was won by Cormier. But the fight was marred by criticism after Cormier seemed to poke his opponent’s eye during the fight.

Cormier later came out and admitted that he didn’t do it wantedly and it was just an accident.  Stipe Miocic has also not spoken much about the incident.

Stipe Miocic has remained quite professional throughout his MMA career, hence he does not have any big controversy to his name apart from this incident from his opponent.

Q- What is the name of Stipe Miocic’s kid?

Stipe has two children, they are Meelah and Mateo Cruz

Q- Does Stipe Miocic still compete in the UFC?

Q- Against whom did Stipe Miocic make his UFC debut?

He made his UFC debut against Joey Beltran on October 8, 2011. He won the bout.

Q- Who is Stipe Miocic married to?

Q- What does Stipe Miocic do outside of the MMA?

Stipe Miocic is also a firefighter and would follow up with it after his MMA career ends.