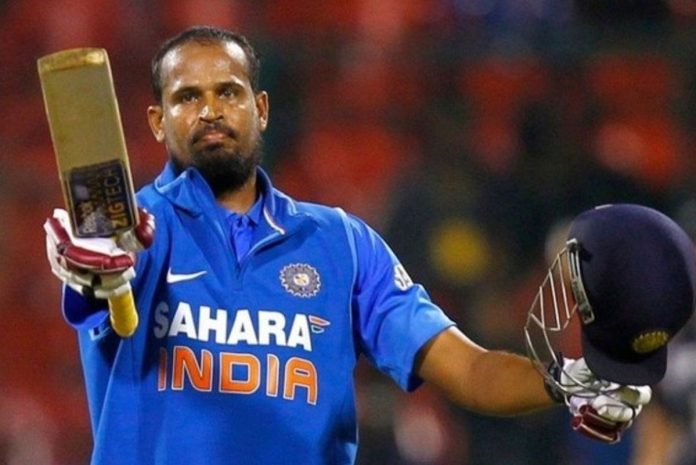 Yusuf Pathan is an Indian cricketer who has represented the national team. Born on 17 November 1982, the Gujarat-based batting allrounder has been part of the Indian national team during its historic run between 2007 and 2011.

He made his T20 debut for India on 24 September 2007 vs Pakistan in the finals of the T20 World Cup 2007. He has also played for the national team in ODIs. Yusuf is the brother of Irfan Pathan, another huge name in Indian cricket!.

Apart from the national team, Yusuf Pathan also made his name by playing in the IPL. The explosive hitter won a total of three IPL trophies during his heyday. These included two with Kolkata Knight Riders (2012,14) and one with the Rajasthan Royals (2008). Pathan eventually announced his retirement in 2021.

In this article, we will have a look at Yusuf Pathan’s Salary, Net Worth, Personal Information, Career details, Wife, Controversies, FAQs, etc

Yusuf Pathan Net Worth: Yusuf Pathan’s net worth is reported to be around $24 million or 175 crores in Indian Rupees. The Gujarat-based batting allrounder has earned his net worth through endorsements, his salary during his playing career, his investments, etc.

Yusuf Pathan’s Salary: Over the years, Yusuf Pathan reportedly earned approximately INR 51 Crores while playing in the Indian Premier League. The maximum salary that he earned was INR 9.6 Crores (2011-2013) which Yusuf Pathan earned while playing for the Kolkata Knight Riders.

It is not known how much the allrounder earned playing for the Indian national team and in the domestic circuit.

Yusuf Pathan’s Endorsements: Here are the companies that endorsed Yusuf Pathan during a point time in his career:

Yusuf Pathan’s Car Collection: The following are the cars that the batsman has had in his garage at a point in time:

Yusuf Pathan’s House: The Indian cricketer reportedly has a bungalow in Vadodara, Gujarat. The house is reportedly fully furnished and has a valuation of approximately INR 6 crores! It is spread across 15,000 square feet and has a swimming pool, lawn, massive parking space, and other amenities attached to it.

Yusuf Pathan reportedly shared the home with his brother and fellow cricketer Irfan Pathan. Their families live along with the Pathan brothers’ parents in this multi-storey home!

Indian Team: Yusuf Pathan got his Indian team debut in the finals of the T20I World Cup on 24 September 2007 vs Pakistan. The all-rounder opened that day as India became the inaugural champions of the tournament. Following this, the Baroda-based allrounder got his ODI debut on 10 June 2008 against the same opposition.

Because of his hot and cold form, Yusuf Pathan was dropped from the Indian squad in 2009. But the batter returned to form and brought himself back into the squad in time for the ICC Cricket World Cup 2011. Though Yusuf Pathan didn’t feature much, India were crowned the champions once again!

He later featured in the 2012 Asia Cup tournament but was dropped soon after as he was again out of form. This turned out to be the end of his career with the national team.

IPL career: Yusuf Pathan had a trophy-laden start to his IPL career as the Shane Warne-led Rajasthan Royals won the title in 2008. He was with RR until 2010 and even scored his highest score (100 with the Royals)

Following this, Yusuf Pathan was picked up by the Kolkata Knight Riders in the 2011 IPL auctions. Yusuf again proved to be the lucky charm, helping KKR to win the IPL titles in 2012 and 2014. But Yusuf Pathan’s performances eventually started to dwindle. Following this, he was removed from the starting XI and eventually removed from the team in 2017.

The Sunrisers Hyderabad picked up Yusuf Pathan in 2018. SRH made it to the finals but eventually lost out that year. Yusuf Pathan was retained by the team in 2019 as well. But eventually, he was let go after the season.

In his IPL career, Yusuf Pathan played 174 matches. In this, the allrounder made 3204 runs and picked up 42 wickets.

Afreen Khan: The All-rounder got married to Afreen in 2013. The two reportedly had an arranged marriage. As per reports they were neighbors at a point in time. Afreen is a physiotherapist by profession but it is not known if she still practices it.

The couple is blessed with two beautiful sons named Ayaan and Riyaan Pathan. Yusuf and Afreen keep their social lives private and not much is known about them to the public.

Slapping a fan: In 2014, Yusuf Pathan slapped a fan in a Ranji Trophy game between Baroda and Jammu & Kashmir. The fan reportedly passed an indecent comment and Yusuf Pathan was in no mood to forgive him.

This resulted in a one-game ban for Yusuf Pathan.

Refusing to Walk: Yusuf Pathan was given out wrongly in a Ranji Trophy game between Baroda and Mumbai in 2019. The ball hit Pathan’s chest and was caught by the field at short leg.

The Umpire gave him out and this made Pathan furious and he refused to leave the pitch. Mumbai captain Ajinkya Rahane and the leg Umpire had to intervene and only then did Yusuf Pathan walk back to the dressing room.

Doping Ban: In 2018 the BCCI banned Yusuf Pathan for 5 months after the allrounder tested positive for a substance named Terbutaline. Pathan said that he took the substance unknowingly as it is mixed with a medicine that he takes but the BCCI banned him nevertheless.

The spinner is active on social media as well

Yusuf Pathan generally posts about cricket, his pastime activities, and his friends and family.

Q- What is the name of Yusuf Pathan’s children?

He has two sons named Ayaan and Riyaan Pathan.

No, he has retired from professional cricket

Q- Against whom did Yusuf Pathan make his India debut?

It is reported that he currently lives in Vadodara, Gujarat, India.

Q- Who is Yusuf Pathan married to?