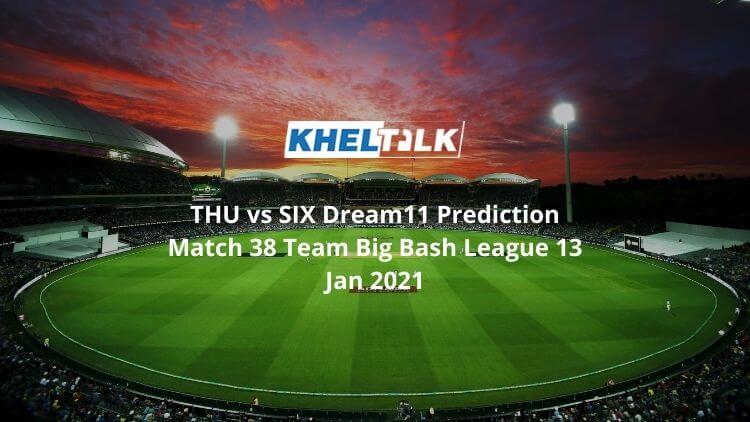 Here are the stats for the teams THU vs SIX:-

The pitch of Manuka Oval, Canberra has provided assistance to the batsmen more, especially, in recent matches. Sydney Thunder has a great record at this venue in this tournament currently and have won four out of their five outings at this venue.

Canberra will enjoy a good sunny day on Wednesday after experiencing rains for the past two days. The temperature is expected to be 29-degree Celsius and the humidity to be 38%.

Though the climate will be sunny, we can expect a sticky wicket because of the scattered rains for the past two days at Manuka Oval. Thus the batting at this venue will be easier, and most of the teams would prefer adding more runs on the board after winning the toss. The teams will be looking for something around 190 to 200 here.

Sydney Thunder will be looking to go all-in here to get back to the first position in the points table. The team does have a strong squad to do the same, making it an interesting contest. Here is the Dream 11 prediction for the Sydney Thunder squad.

They will be coming into this contest after losing their previous outing against Perth Scorchers. The visitors almost had the match but went just 17 runs short of the target. However, playing at Manuka Oval will be an added advantage for the team as they possess a great record here.

Sydney Sixers are the best team in the tournament at the moment, thanks to the complete team effort. The experienced players like Dan Christian, James Vince, Daniel Hughes has stood up for the team when it was needed and they had the support of the youngsters who have produced match-winning innings. Here is the Dream 11 Prediction for the squad of Sydney Sixers.

As they face one of the toughest opponents here, Sydney Sixers will be looking to bring in their A-game to bounce back from the loss in the previous game and to stay at the top of the table. While the team will depend a lot on Josh Philippe with the bat, Carlos Brathwaite will be the player to watch out for here.

While the team is likely to play the same eleven from the previous match, there might be a change or two especially, in the bowling department. We might get to see Sandhu or Kerr in today’s match.

Here are a few predictions for the captain pick for the THU vs SIX clash.

Josh Philippe- The Sixers wicket-keeper is in good form and is the leading run-scorer for his team at the moment. He has 273 runs so far.

Alex Hales- With no doubt, Alex Hales holds the key when it comes to the batting of Sydney Thunder. The England batsman has 269 runs with a strike-rate of 161.07 here.

Tanveer Sangha- The youngster Sangha is making turns with his brilliance with the ball. He is currently the leading wicket-taker for Thunder with 15 wickets with an economy rate lesser than 8.

Daniel Hughes- The Sixers Skipper Hughes will be looking to lead the team from the front and is doing an excellent job so far. He averages 33 here.

Apart from the THU vs SIX Dream 11 prediction for the captain, here are a few players who are likely to star, here according to the Dream 11 Prediction by our experts.

Sam Billings has been doing an excellent job behind the stumps and with the bat, he has performed well and has a few cameos to his name.

Green is one of the most consistent performers for the team with the ball. The spinner has a decent economy rate as well, he has an 8.64 economy rate here.

McAndrew has picked up wickets at regular intervals and has given away 8.68 runs per over.

The skipper is having an excellent tournament and has 3 fifties so far in the tournament.

Daniel Christian has contributed well with both bat and ball. He is expected to perform well here as well.

Brathwaite has been the pick of the bowlers for the Sixers and his hard-hitting ability is certainly an added advantage here.

Here is the Dream 11 Team prediction for THU vs SIX. Since the pitch assists the batsmen, we have picked more number of batsmen in our team.

Who Will Win Today Between THU vs SIX Dream11 Prediction, 38th Match?

According to Kheltalk’s astrology THU vs SIX Dream11 match Prediction, SIX will win the match today.

According to Kheltalk’s THU vs SIX Dream11 toss prediction, THU will win the toss and ask SIX to bat first