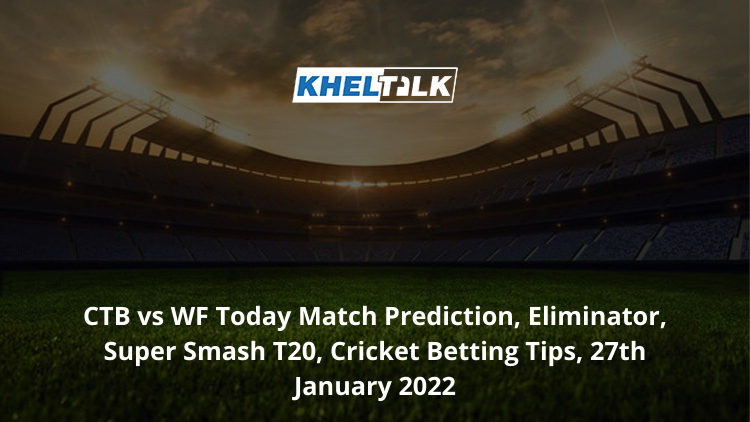 KhelTalk is the only destination that brings you the finest today’s match prediction that you can trust. We are here for CTB vs WF, Today Match Prediction, Super Smash 2021/22, Online Cricket Betting Tips, which will provide every user with a clear picture of which team and in what aspect they can place their bets.

Canterbury Kings will face Wellington Firebirds again in the Elimination Final of the Super Smash 2021-22 as University Oval, Dunedin will host this fixture. The winner of this fixture will face Northen Brave in the finals of the Super Smash. They are currently placed in the second spot on the points table with 7 wins in 10 league games. They will be heading into this match with a recent win against Otago Volts to back them up.

Canterbury won their last match against Otago Volts by 8 wickets. After electing to bat first Otago posted 185 Runs on board by the end of 20 overs. Henry Shipley starred with the ball for Canterbury bagging four scalps in his four overs while conceding just 23 runs. Matt Henry, Daryl Mitchell, and Cole McConchie accounted for a single scalp each.

In the chase, Canterbury successfully chased down the target in 17.1 overs as Tom Latham laid quickfire 66 off 35 while Daryl Mitchell remained unbeaten at 68 off 39 to take them across the winning line. Chad Bowes and Leo Carter also contributed for 46 Runs on the board.

After a shaky start to their campaign in the tournament, Wellington Firebirds were off on a winning track that took them to the third spot on the points table. They have won five out of the 10 league games so far and will be looking to square off things against Canterbury to reach the finals.

They faced defeat against Northern Brave in their last game, where after being asked to bat first Firebirds posted a total of 167 Runs on board. Finn Allen (64 off 28) and Michael Bracewell (63 off 38) partnership completely bamboozled the Brave bowlers. But after both of their dismissal, there was no player who could back the Firebirds to a higher total.

In the chase, mixed efforts from the Brave batters sealed the win for them in 19.3 overs as Firebird bowlers failed to keep a check n the flow of runs. James Neesham and Ben Sears bagged two scalps each but Sears gave away 47 runs in three overs.

The weather is expected to be cloudy in Dunedin as we can see a dip in temperature early morning. There are healthy chances for light rain to intervene during the course of play while the temperature will hover around 12-16 °C.

The pitch at University Oval in Dunedin is a high-scoring surface. It will provide assistance to both batters and bowlers. The batters can play their strokes freely as the new ball comes nicely onto the bat. The surface is expected to get slower as the game progresses therefore chasing has reaped better benefits in the past.

CTB vs WF, Elimination Final, Who will win the match, Today Match Prediction

Canterbury Kings is expected to win against Wellington Firebirds.

Backed by a recent win against the Otago Volts, Canterbury Kings will be heading into this contest as favorites. They displayed brilliant overall performance by both their departments and clearly look a more well-settled side than Wellington Firebirds. Their top-order performed up to the mark in the last game and the whole squad held their nerves in pressure situations.

Though the Firebirds have a deep-seated batting line-up with the likes of their skipper, Michael Bracewell, Finn Allen, and Troy Johnson they are overly dependent on them. When these three fail to perform on any given day their whole batting order collapses. Their lead bowler, Ben Sears also gave away a heap of runs during the last match.

Bowes played a splendid knock in a previous match against Otago hammering a half-century in 32 deliveries while adding 20 off 15 in the last match against Volts. He is currently the leading run-scorer for Canterbury after contributing 263 runs in 10 league games with a strike rate close to 146. The 29 year old South African has risen on many occasions before to score for his side in many games and will prove to be a good pick for this contest.

Finn Allen has been in solid form with the bat in this edition, having mustered 268 runs at an unmatched strike rate of 197.05. He scored 68 against Otago while hammering 64 off 28 in the last match against Braves. He is a decent player at the top order and his hard-hitting abilities cannot be neglected. Allen is a safe pick here for this contest or you can alternate him with the leading scorer of the tournament, Michael Bracewell whose performance in the last match has been top-notch (63 off 38).

Sears is a safe pick here as he is the only bowler who has shown some economical figures in the past few fixtures. He bagged two scalps in the last match against the Braves but gave away heaps of runs at the same time. He will definitely make a comeback in this contest as he is way ahead of his peers, leading in the wicket tally having bagged 13 wickets in the league stages so far.