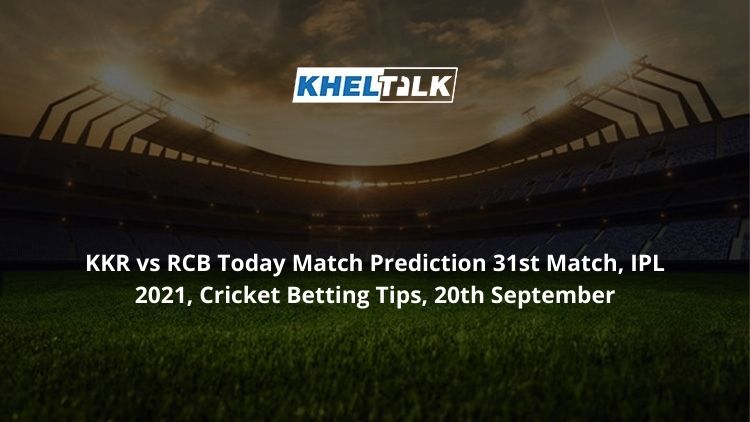 KhelTalk is the only destination that brings you the finest today’s match prediction that you can trust. We are here for KKR vs. RCB Today Match Prediction, 31st Match, IPL 2021 Online Cricket Betting Tips, which will provide every user with a clear picture of which team and in what aspect they can place their bets.

Royal Challengers Bangalore had a memorable start to this season by winning their first four matches for the first time in their history but tables can turn quickly in the 2nd half of the season. The absence of Washington Sundar is a huge blow to the team but the inclusion of Wanindu Hasaranga and Chameera can be a masterstroke.

They are up against their arch-rivals Kolkata Knight Riders who are in the bottom half of the table and have struggled recently against Royal Challengers Bangalore. Virat Kohli and Devdutt were instrumental at top of the order but now things are different as pitches are different and Kohli himself has not been in great touch recently.

Kolkata Knight Riders are in every difficult position at the moment and every match is almost a must-win for them. They are 7th in the table and have only won 2 matches so far which is very surprising given the strength in their squad. The opening slot was a big conundrum for them and it will be interesting if they try new combinations or follow the same pattern.

Eoin Morgan is under tremendous pressure because of both captaincy and personal form. He has struggled badly this year and especially against spinners, he has looked vulnerable. KKR has a solid squad and some players are coming off good Caribbean Premier League which will be a huge boost for them. Andre Russell has looked dangerous recently and if he starts exploding then KKR might go all the way.

The temperature in Abu Dhabi is usually 36 Degree Celsius and humidity will be at its peak. Fielders will have to face the heat even in the evening also. Since the month of September, there is no chance of rain and the weather will be clear with low wind speed.

Pitch was good for batting in PSL this season and 170 was the average score. Seamers will have movement in initial overs and both teams need to make most of these overs as it could be the deciding factor of the match. Spinners will also come into play at one stage and middle overs to control the tempo of the game.

KKR vs RCB– Who will win the match, Today Match Prediction:

Devdutt Padikkal has been a sensation since his arrival in the IPL and he was brilliant in the first half of the season. He scored a swashbuckling century against Rajasthan Royals already this season and if Royal Challengers Bangalore needs to go all the way, Devdutt needs to continue his form. He likes to go strong in the powerplay and can even dictate games in middle overs. He can give you good returns from this match and is our pick for the best batsman.

Nitish Rana is going to be the most crucial player for Kolkata Knight Riders in 2nd half of the season. He has scored 201 runs so far in the season which is decent but he is capable of more. He is really destructive against spinners and on slow pitches of Abu Dhabi, he can take down spinners in the middle overs. Rana is likely to bat at number 3 or at the opening slot which gives him a great opportunity to score big. He can give you good returns from this match and is our pick for best batsman from Kolkata Knight Riders.

Sunil Narine was fantastic for Trinbago Knight Riders in the recent CPL and picked 12 wickets at an average of 14. Although emergence for Varun Chakravarthy has blocked his way into the playing XI of KKR in the first half of the season now he will be Kolkata’s biggest weapon, especially after Pat Cummins pulling out. Narine doesn’t need to prove to anybody about his capability but recently he was criticized for his wicket-taking ability in IPL and this is a perfect platform for him to shut his doubters. Sunil Narine is a big name in the IPL and can give you big returns.

Yuzvendra Chahal will be under scanner throughout this season after his controversial exclusion from the Indian Squad for World T20. He has been India’s best white-ball spinner for a long time but in the last year, his form has dipped. Chahal is a traditional leg spinner who likes to bowl slow but recently batters have been smart against him and Chahal has struggled to deceive batsmen in the air. Chahal will have extra responsibility after Sundar’s injury but the pressure gets the best out of him. He can give you good returns and is our pick for best bowler from Royal Challengers Bangalore.