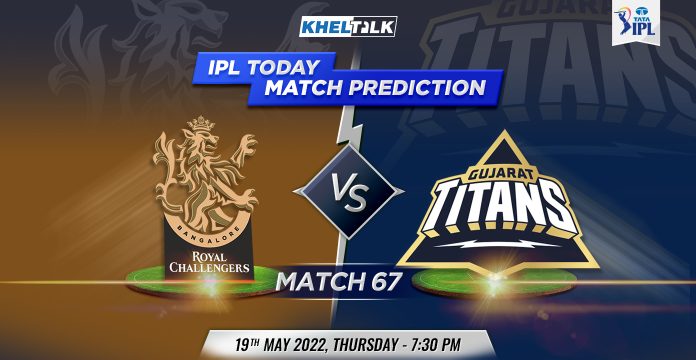 Welcome to the RCB vs GT Today Prediction curated by Kheltalk cricket experts. Gujarat Titans will face Royal Challengers Bangalore in the 67th match of the TATA IPL, 2022 on Thursday, 19th May 2022 at the Wankhede Stadium. Keep on reading for more information on the RCB vs. GT game.

Royal Challengers Bangalore have made their road really tough for playoffs with some disappointing performances in 2nd half of the tournament. If they win the last game, then they still might not reach the playoffs due to the inferior net run rate to Delhi Capitals. Cricket is known as a game of uncertainty and Bangalore will be looking to put their best show in their last game. Luckily the match is at Wankhede where they have enjoyed big success this season.

On the other hand, their opponents Gujarat Titans are in a completely different position with their ticket to the qualifier already confirmed. They have been relentlessly fearless throughout the tournament and will be a big force to face in the playoffs. Before playoffs, they might look to give chances to youngsters in the last match of the tournament which isn’t going to affect their position.

Players like Rahmanullah Gurbaz and Noor Ahmed could be in contention to make their IPL debut by resting key players. This game is dead rubber for Gujarat but Royal Challengers Bangalore are expected to come guns blazing as they need to win this game with big margin

Top Batsmen for RCB vs GT

Top Bowlers for RCB vs GT

RCB vs GT Today Match Prediction, IPL 2022, Who Will Win the Match?

Gujarat Titans are likely to go with their 2nd string squad as they might look to rest their key players before playoffs. These experimental changes could open gates for Royal Challengers Bangalore who will be looking to win by big margin to boost their run rate. Wankhede is expected to be batting friendly and big runs could be on the line from RCB. We think Royal Challengers Bangalore will win this match.