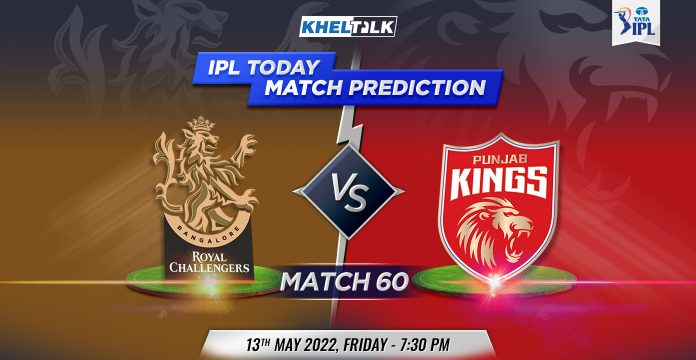 Welcome to the RCB vs PBKS Today Prediction curated by Kheltalk cricket experts. Punjab Kings will face Royal Challengers Bangalore in the 60th match of the TATA IPL, 2022 on Friday, 13th May 2022 at the Brabourne Stadium. Keep on reading for more information on the RCB vs. PBKS game.

Royal Challengers Bangalore have two games left and at least one win will put them in contention for a playoff spot. But their negative run rate makes both matches a must-win as one loss would wide open the gates for teams like Delhi Capitals and Punjab Kings who can reach 16 points as well. Currently, Royal Challengers Bangalore are playing impressive cricket and have won the last two games.

One loss of Royal Challengers Bangalore could wide open the tournament and Punjab Kings is one of the teams who are hunting for playoffs. The Punjab team has already once defeated the Bangalore team and would be hoping to replicate the same performance.

However, inconsistency has been their biggest problem but the form of Arshdeep and Rabada has been spot on recently which could trouble Banglore batters who have struggled to swing balls. Both teams are desperate for a win but we think Royal Challengers Bangalore are favorites for this clash because of their recent form and ability to soak in the pressure of crunch matches.

Top Batsmen for RCB vs PBKS

Top Bowlers for RCB vs PBKS

RCB vs PBKS Today Match Prediction, IPL 2022, Who Will Win the Match?

Punjab Kings are in a more critical situation than Royal Challengers Bangalore and Punjab isn’t known for playing well under pressure. The Brabourne Stadium is expected to be on a good batting slope and Royal Challengers Bangalore has a quality attack to deal with extreme situations. While Punjab Kings are struggling to get breakthroughs in middle overs and are heavily dependent on Rabada to take wickets with the new ball. Whereas the Bangalore team is well balanced and more formidable to come out on top.